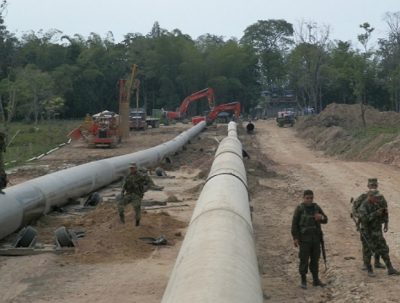 The hit, which military sources say happened on Monday, has been credited to the leftist National Liberation Army (ELN), and marks the 17th pipeline attack this year. While no injuries were reported, the pipeline blast did cause oil to spill into a nearby river. The military later clashed with the ELN, which resulted in the death of at least six soldiers.

In March, the government said it would engage in talks with the ELN. Similar talks with the Revolutionary Armed Forces of Colombia in late June resulted in a bilateral ceasefire. Peace talks are said to be in their final stages.

The 780-km Caño-Limón Coveñas pipeline transports crude from Occidental Petroleum-operated fields to the port of Coveñas for exports. It has a capacity of some 210,000 bopd.