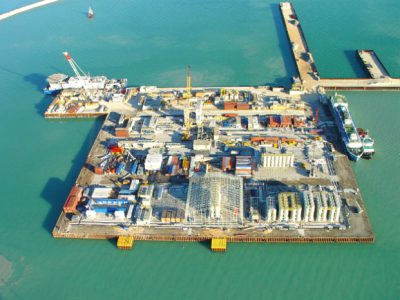 MILAN, September 30, 2015 – Italian energy company Eni and Kazakhstan’s state-owned KazMunayGas have entered into a 50-50 joint venture to explore and operate in the Isatay offshore block in the Caspian Sea, Eni reported in a Wednesday press release.

The agreement to create the joint venture company was signed in Milan by KazMunayGas management board chairman Sauat Mynbayev and Eni CEO Claudio Descalzi, in the presence of president of Kazakhstan Nursultan Nazarbayev and Italy’s prime minister Matteo Renzi.

Eni already has presence Kazakhstan’s onshore Karachaganak field and is equity partner in several offshore fields in the north Caspian Sea. Eni also operates in the country’s Kashagan oil project, shut down in 2013 due to pipeline malfunction, and is scheduled to continue production from the field by the first quarter of 2017.

The deal follows a Tuesday Reuters report which said Kazakhstan’s oil production had fallen by 1.2 percent to 592 million barrels last year, and was forecast to drop to 583 million barrels by the end of the year. The country’s Tengiz oilfield – currently its largest in production – operated by Chevron-led venture TengizChevroil, will maintain flat production compared to 2014.

The US Energy Information Administration estimated in 2012 that there were 48 billion barrels of oil and 8.27 tcm (292 tcf) of natural gas in proved and probable reserves in the basins of the Caspian Sea.

For more news and features on Kazakhstan, click here.