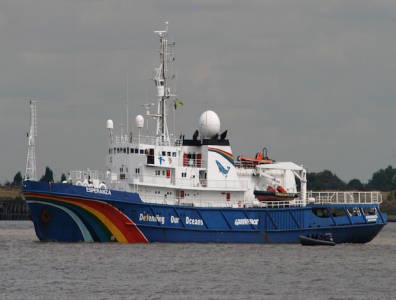 SEATTLE, April 7, 2015 – Six members of international activist group Greenpeace illegally boarded a Shell oil rig in the Pacific Ocean on Monday. The activists are protesting the company’s plans for oil operations in the Arctic, off Alaska’s North Slope, by setting up a camp aboard the Polar Pioneer.

The move has caused outcry from environmentalists around the world, who say that the exploration and drilling operations in the Arctic could accelerate climate change and pose oil spill risks.

“We respect their views and value the dialogue. We will not, however, condone the illegal tactics employed by Greenpeace. Nor will we allow those stunts to distract from preparations under way to execute a safe and responsible exploration programme,” Shell said in a statement.

The rig, owned by multinational drilling contractor Transocean, is being transported by the heavy-lift vessel Blue Marlin to Seattle before it makes its way up to the Chukchi Sea, where Shell intends to drill for oil next summer. The exploration area is estimated to hold more than 15 billion barrels of oil, according to the US Geological Survey.

Click here for more news and features from the US