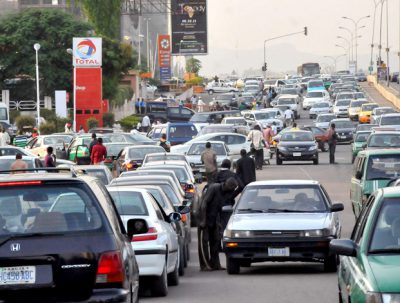 Nigeria short on petrol due to currency woes

ABUJA, March 4, 2015 – Nigeria, one of the world’s largest oil producers, is reported to be facing acute petrol shortages due to the plunging local currency, tighter credit lines and unpaid government subsidies.
According to oil traders and industry sources, Nigeria created its budget, which is dependent on oil revenues, expecting the price of oil to be higher. However, with the falling oil prices, the country is having to print more money to meet its budgetary obligations, causing its currency to slump.
This has led to the rising cost of imports, as Nigeria exports around two million barrels per day of crude but is almost entirely reliant on imports for the 40 million litres per day of petrol it consumes. Petrol is also heavily subsidised by the government, which has not been able to pay the subsidies on time.
Credit problems with banks due to erratic subsidy payments, already a burden for the country’s importers, have been magnified by the plunge in the global oil prices and the country’s currency, leading to a freeze in buying. The situation should correct itself soon as an subsidy allotment was expected on March 10, Reuters News Agency quoted Femi Olawore, the executive secretary of the Major Oil Marketers Association of Nigeria (MOMAN), as saying.