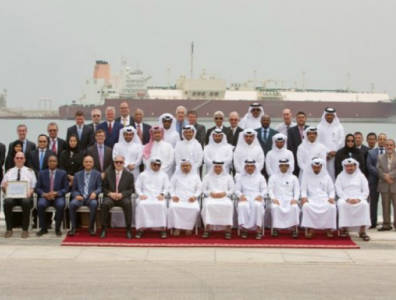 DOHA, May 11, 2016 – Qatar Petroleum has loaded its 10,000th LNG vessel at Ras Laffan. The milestone was marked with a ceremony on Tuesday, attended by a host of local and international oil and gas executives, including company president and CEO Saad Sherida Al Kaabi.

The milestone cargo was loaded aboard the Qatargas-chartered Mozah vessel, a Q-Max LNG carrier bound for the UK. “The achievement of 10,000 LNG cargoes from Ras Laffan Port is a testament to all the hard work and dedication by Qatar Petroleum as well as Qatargas and RasGas,” Al Kaabi said.

Qatargas CEO Khalid Bin Khalifa Al Thani called the event “a tribute to the combined expertise of our partners, staff and contractors.”

The first LNG cargo at Ras Laffan was loaded in 1996, when the port first opened. The 5000th cargo was achieved 15 years later, in June 2011. Commenting on the most recent milestone, RasGas CEO Hamad Mubarak Al Muhannadi said the occasion symbolised “how Qatar has developed natural gas into a resource that has benefited not only our people but many countries around the world.”

for more news and features on Qatar, click here.