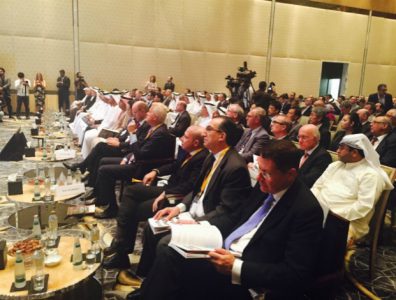 The Minister of Energy, H.E. Suhail bin Mohamed Faraj Fares Al Mazrouei, delivered the keynote address at the launch event, which was succeeded by the year’s awards ceremony and a roundtable discussion. Commenting on the progress made in Abu Dhabi’s energy industry over the past year, he said: “As a nation blessed with the seventh-largest crude oil reserves in the world, the UAE continues to fulfil its responsibility to protect and sustain global energy markets. In a time of unsteady oil prices, we are showing in Abu Dhabi and across the country that we remain dedicated to reaching our long-term production goals.”

After the launch, H.E. Al Mazrouei chaired a roundtable discussion that brought together executives of several of the largest companies operating in Abu Dhabi’s oil and gas industry, including Shell, Total ABK, BP and ADNOC, in a debate on local and international co-operation in increasing the UAE’s supply of natural gas can help meet the country’s growing demand for energy.

Flame dies out: Total finishes up flare-out of Nigeria's offshore Ofon field
Next