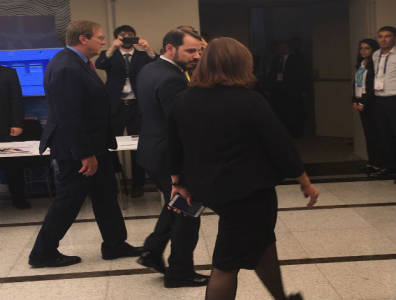 ISTANBUL, October 13, 2016 – The Israeli and Turkish energy ministers discussed the possibility of building a natural gas pipeline linking the two countries during the World Energy Congress in Istanbul on Thursday.

Israeli Energy Minister Yuval Steinitz said the ministers had decided “to establish immediately a dialogue between our two governments […] in order to examine the possibility of such a project that will enable us to bring natural gas from Israeli economic waters into Turkey and from Turkey to Europe,” at a snap press conference with his Turkish counterpart Berat Albayrak at the congress.

The meeting was the most significant of several steps towards reconciliation between the two countries in recent months, after a rupture in 2010 following a deadly raid by Israeli forces on a Turkish ship that left 10 Turkish activists trying to breach the Gaza Strip blockade dead.

In recent years, some 900 bcm (31.8 tcf) of natural gas have been discovered in offshore Israel, and Steinitz said further exploration could lead to new finds.

“Next month, we will open the Israeli economic waters for further exploration, and the scientific estimate is that most of the natural gas is yet to be found, another 2.2 tcm,” Steinitz added. “This is a lot of gas – much more than Israel can consume.”

On Monday, also on the sidelines of the WEC, Russian President Vladimir Putin and Turkish President Recep Tayyip Erdogan signed an agreement to build TurkStream, a gas pipeline project linking Russia and Turkey.