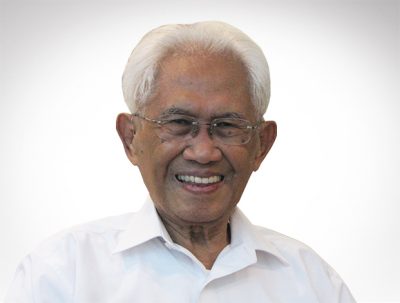 The important thing is that the industry trusts that the government is willing to listen and co-operate with them.

Subroto, the chairman of the Mines and Energy Society (Bimasena), talks to TOGY about the gross-split arrangement, co-ordination between the government and the private sector, and the outlook for the hydrocarbons industry.

Bimasena is a facilitator between public and private parties in the energy sector. Bimasena also helps private enterprises make sure foreign investments and energy startups comply with laws and regulations in place with regard to Indonesia’s energy industry, making communication channels between the Indonesian government and energy players more transparent.

• On the energy mix: “We have learned new and renewable energy alone will never be adequate to supply the need worldwide.”

• On policy: “The government needs to make it clear that they’ll continue to support the development of fossil fuels while still taking into consideration the difficulties that we will face in East Indonesia, which has different and difficult areas.”

• On outlook: “The government should stabilise the short-term, medium-term and long-term prospects. If the government can implement this, then profits will come.”

Most TOGY interviews are published exclusively on our business intelligence platform TOGYiN, but you can find an abridged version of our interview with Subroto below.

Is the gross-split arrangement a positive measure?
The statement from the World Bank was very good. When you look at the current the rate of return for the private sector, it will not harm their earnings. Better formulation of the gross split could marginally benefit investors without the impeding the government’s interest. The statement by the World Bank is encouraging because it says the private sector will have marginal growth if the gross split is applied there.

Do you think oil and gas companies will be more attracted to invest?
The crude price and the global situation will always influence domestic policy. It is important that the government formulates the policy well. However, external factors will always influence these matters. The government should stabilise the short-term, medium-term and long-term prospects. If the government can implement this, then profits will come. Things have changed in Indonesia. The industry is following, and it is on them to come up with something.
There is a common understanding that gross split is only one part of the many challenges. That subject is now more open for discussion because the government is more willing to make changes.
The industry has to understand the situation has changed. During Suharto’s presidency the government had a uniform policy that the industry had to follow without questioning. Now, under democracy, people want to take part in the decision making. It is a problem of adjustment. The important thing is that the industry trusts that the government is willing to listen and co-operate with them. The government is expected to show that they are interested in tackling this so-called crisis that the industry is facing.

How has Indonesia evolved in terms of the oil and gas industry, as a democracy and a country?
It has changed between the previous government and Jokowi’s [President Joko Widodo] present government. Jokowi has to face what he inherited from the past regime and accommodate this aspiration.
First of all, there should be a common agreement about the ultimate goal of Indonesia. When we achieved independence it was stipulated that we are independent, but now we have to make a transition to make that a reality. That is the feeling of democracy and nationalism. There has to be a change of mindset from both sides. The industry recognised that there is a change in atmosphere. The government also recognised the industry has a right to question its policies.
The first thing that needs to happen is that the industry needs to trust that the government is aware of that problems the industry is facing.
The second thing is that the industry needs to see that the government is aware that the upstream development of oil and gas continues to be a driver for economic growth in Indonesia. Government thinking about development in the upstream sector hesitated because there were low prices. Importation was easier, and there was a question whether to continue to import or explore and produce domestically. By 2040 or 2045 it will be very difficult to satisfy the need for imports.
The industry continues to suggest developing the upstream sector, and that has been taken up by the government. I see that there is a better understanding between the industry and the government.

How effective will the energy mix presented by the government be?
The private sector needs to come in. The private sector also thinks that the price for new renewables will not be able to compete with the existing old energy. We also understand that the coal we have should not be exported for foreign exchange but should be used for domestic projects. The way resources are to be handled is not quite clear. Is it for earning or is it for supporting domestic energy policy?
The government needs to make it clear that they’ll continue to support the development of fossil fuels while still taking into consideration the difficulties that we will face in East Indonesia, which has different and difficult areas.
The problem of production sharing is also coming up. The minister is always interested in the now. Sometimes you do nothing about the long term, and the present administration wants to know what we earn now from natural resources. Sometimes the long-term aspect, which at this time seems negative, will be positive later on. Politicians only think in five-year terms maximum.
We have learned new and renewable energy alone will never be adequate to supply the need worldwide.

What challenges does Indonesia face?
Indonesia used to be one of the important hydrocarbon centres of Southeast Asia. The question in the mind of the people is what our capacity is. People talk about the proven reserves versus the probable reserves. The proven reserves are only 3 billion barrels. That means that in 10 years it will be gone. The probable reserves could be quite a lot in the eastern part of Indonesia, but it is very difficult terrain.
Speculation is that there is at least the same amount of probable and proven reserves. The policy at this moment should be to transfer from probable to proven reserves in the coming years. If we manage to shift the probable reserves of 3 billion to proven reserves, at least that will extend Indonesia’s hydrocarbons life.
What is the ability of the human mind to think about the future? We are now coming together with all our capabilities to see what 2045 will mean for Indonesia. Capability is a goal, and the ministry is making a presentation about the future of Indonesia in 2045. The real question is whether this is a prediction or a real projection.

What would be your message about the future of energy generation?
The message right now is that knowledge is power. We need to be able to learn, worldwide, what the future of hydrocarbons is. One of the weaknesses of Indonesia is that it is reluctant to learn from outside. We have the feeling that we know better. We need to be open to ideas. Of course, people are very busy right now, but they are thinking about the future.
We also need a better understanding within the private sector and the government. Bimasena will try to encourage synergy between the private sector and the government.

For more information on Indonesia’s new gross-split PSC, energy mix strategy and exploration efforts, see our business intelligence platform, TOGYiN.
TOGYiN features profiles on companies and institutions active in Indonesia’s oil and gas industry, and provides access to all our coverage and content, including our interviews with key players and industry leaders.
TOGY’s teams enjoy unparalleled boardroom access in 35 markets worldwide. TOGYiN members benefit from full access to that network, where they can directly connect with thousands of their peers.