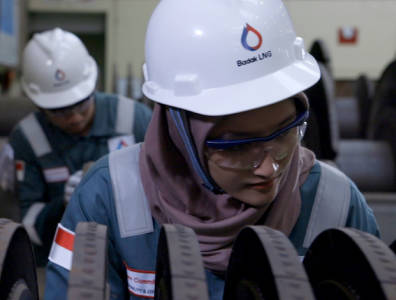 Indonesia is betting strong on liquefied gas, rolling out a macro and micro strategy in order to one day become an LNG powerhouse.

Indonesia’s archipelagic nature has pushed it to develop local LNG production and distribution. The government is betting on both large- and small-scale facilities not only to advance its journey towards a more sustainable industry, but also to power each of its islands. Despite Covid-19’s impact on the oil and gas industry, Indonesia is eager to continue building its virtual pipeline.

The Asia-Pacific region is the largest LNG hub in the world, with an internal network that moves more than 75 million tonnes per year (tpy). This is possible as it hosts some of the world’s most prolific producers and consumers. Estimates suggest that by 2040, Asia will contribute 40% of the world’s gas demand growth, positioning LNG as a flourishing sector in the years to come.

FERTILE GROUNDS: Indonesia is a key piece of this regional puzzle. This maritime nation has created fertile grounds for its LNG landscape to thrive, with intra-trade among its islands reaching 3.6 million tonnes in 2019. Here, the combination of isolated consumption centres spread across the archipelago and a limited gas pipeline system has made LNG a viable solution.
Today, the country has several LNG strongholds including the Bontang LNG plant in East Kalimantan, operated by state-owned Badak LNG; the Tangguh LNG plant in West Papua, run by BP; and the Donggi Senoro plant in Sulawesi, operated by Donggi Senoro LNG. Other key assets include the Arun LNG terminal, which was the world’s first LNG exporting facility to be converted into an import terminal, along with the FSRUs Jawa Barat and PGN Lampung, which are owned by Pertamina and Höegh LNG, respectively.
This has allowed the country to sustain a solid liquefaction capacity of 26.5 million tpy, which is expected to increase thanks to future ventures such as Abadi LNG, the Tangguh Train 3 expansion, the Jawa-1 FSRU and Sengkang LNG Train 1. Indonesia’s LNG potential is strong, as the government now aims to maximise its use in order to feed the hungry natural gas market. “LNG can play a very significant role in the supply of energy in Indonesia and also this country has clear potential to become a key LNG hub,” Ari H. Soemarno, consultant and member of Bimasena’s Energy Executive Team, told The Energy Year.

THE NEW OIL: Gas is the new oil in Indonesia. The government has set itself the task of lowering the use of crude oil, especially diesel, and replacing it with gas as a more sustainable source of energy. In February 2019, the Ministry of Energy and Mineral Resources launched its latest Electricity Procurement Plan, or RUPTL, 2019-2028, which reinforces the mandate of having natural gas account for 22% of the country’s energy mix, firing a great part of its domestic power sector, including industries and households.
The government, via PLN, aims to reach 100% electrification, providing power to each and every island. Natural gas will be therefore an integral part of this quest. To cover the growing demand for electricity, new power plants are being built which are poised to generate 35 GW by 2024, from which 25% will be gas-fired.
Yet a challenge remains in far-flung areas located in the east of Indonesia, which either rely on sources such as coal and diesel or remain powerless. It is here where LNG has become the most plausible option, and a multibillion-dollar package was recently launched to develop small-scale LNG facilities in several regions. This will contribute to PLN’s gasification programme, which will see one of its first steps in the conversion of 52 diesel-fuelled power plants to LNG-fuelled ones. Indonesia is betting strong on liquefied gas, rolling out a macro and micro strategy in order to one day become an LNG powerhouse.

MACRO LNG: Indonesia has constructed world-class LNG facilities. BP’s Tangguh project is one of the country’s LNG forts, comprising the development of six gasfields which fall under the Wiriagar, Berau and Muturi PSC in Papua Barat. Natural gas is pumped from the Vorwata field by two offshore platforms and then piped towards two onshore trains with a combined capacity of 7 million tpy. The expansion of Tangguh via Train 3 is valued at USD 8 billion and will include the construction of an additional 3.8-million-tpy train, two offshore platforms, 16 new production wells and an extra jetty. Production from Train 3 will cater 75% of output to PLN, while the rest will be exported.
Although start-up plans were set for Q3 2021, the arrival of Covid-19 has triggered major delays. EPC contractor Chiyoda Corporation declared force majeure in March 2020, which, added to difficulties in moving workers and materials, will delay commissioning until 2022.
Another mega-project making waves in the region is Abadi LNG. Located in the deepwater Masela block, this venture aims to develop the wealth found in the Abadi field, which has estimated gas reservoirs of around 283.2 bcm (10 tcf). Inpex Masela (65%) and Shell (35%) will steer this onshore endeavour, which is valued at USD 20 billion, aiming to produce 9.5 million tpy of LNG.
A plan of development has been approved, and an MoU was inked in February 2020 for long-term domestic supplies between Inpex Masela, PLN and Pupuk Indonesia. Geo-marine surveys will be performed by Fugro, after which the FEED for offshore production facilities and subsea pipelines will proceed.
However, the Covid-19 crisis has hampered much of this progress, likely pushing start-up deadlines to beyond 2027. The possible case of Shell divesting from this project would also require a new tendering process to assign novel partners. Despite the obstacles, Abadi LNG aims to be a game-changer which will optimise domestic gas production and utilisation in Indonesia moving forwards.

MICRO LNG: The LNG landscape is changing rapidly, becoming more malleable to serve consumer and geographical needs. Small-scale LNG is gaining support in Indonesia as it is seen as an ideal model enabling the effective supply of natural gas to the archipelago’s many islands with their increasing demand for energy.
The country is showcasing an ambition to become the Asia-Pacific region’s first and most important small-scale LNG player. This was evidenced in March 2020 when a USD 2.5-billion investment scheme was announced by PGN to support the development of small LNG receiving and distribution facilities. The company aims to upgrade the Arun LNG terminal in Aceh, develop PGN’s FSRU Lampung in Sumatra and construct a new medium-scale terminal in Ambon – three regional distribution points on which Indonesia’s LNG value chain will rest.
Small-scale LNG networks have facilities with scopes ranging from 0.35-cubic-metre trucks up to 160,000-cubic-metre FSRUs or FLNG vessels. Many advantages are inherent in small-scale LNG, which requires lower initial investment, brings supply on line faster and enables more flexible operations compared to traditional pipeline or LNG supply methods.
These dynamics match well with Indonesia’s economic and structural reality. Many regions, especially in the east, either can’t afford or simply don’t need large supplies of LNG, and smaller bulks would match different rates and demands.
“It is not possible to stop at small islands with a huge tanker as these only have a small jetty. Also, such islands only require 10-15 MW of energy, while we would be looking at vessels carrying 5,000-7,500 cubic metres of LNG,” Maya Sariwulan, managing director of AICO Energy, told The Energy Year.
The problem, however, remains in the economy of scale since small-scale LNG tends to be more expensive on a per-million-Btu basis and also faces more operational intricacies. The widespread implementation of small-scale LNG across the country could eventually ameliorate these issues.
Small-scale LNG operations are already running on the island of Bali, where a 1.42-mcm (50-mcf) per day small-scale FRU and small-scale FSU feed a 200-MW power plant in the port of Benoa. Likewise, a pilot for retail LNG sales has been under development since mid-2018, with RISCO DPS announcing a successful first year of operations.
It is yet to be seen how the global LNG sector will rebound following the Covid-19 shock, but one thing is clear: Indonesia is sowing the seeds for a future blossoming of its own LNG network.