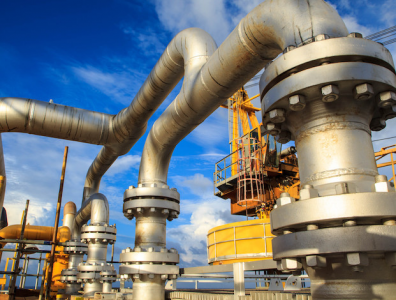 LNG and CNG infrastructure will need to be developed to ensure further utilisation by local industries and logistics sectors.

Minimum refining capacity to be built at the petroleum hub: 900,000 bpd

In Ghana, a new era for energy infrastructure

Ghana has invested in key projects that will enable the country to ensure its energy security, set the basis for future monetisation opportunities and pave the way for a sustainable energy transition. If all developments go as planned, the country is gearing up for a new era of gas utilisation and reliable energy production.

RESHAPING THE GAS MATRIX: The promotion of natural gas infrastructure is considerably more advanced than oil. Significant strides have been made to ensure a gas-fuelled economy and solidify Ghana’s energy security through a diversity of supplies for power generation, industrial feedstock and domestic consumption.
Currently, natural gas powers most of the thermal power plants in the country. Gas is used for industrial heating in the ceramics and plastics industries and LPG is being promoted for domestic cooking. Eventually, natural gas could be used for combined heat and power for industries such as cement, mineral processing and paper and as feedstock for methanol production, fabrics and paint manufacturing.
To foster a gas-fuelled economy in Ghana, infrastructure is critical. “It is mostly gathering, processing, transmission and on the tail end, distribution,” said Asante. “Even though Africa is energy self-sufficient in oil and gas, accounting for about 8-10% of the world’s resources, we only use about 3%. This is because of a lack of infrastructure, which results in most of our resources being exported.”
In terms of processing, Meridian Group commissioned a mainline compressor station at the Atuabo gas processing plant in October 2021 to boost the delivery of natural gas. “This station will help increase the throughput capacity of the gas coming from the Jubilee and Tweneboa, Enyenra and Ntomme fields, which will now comingle with the gas coming from the Sankofa field,” Muhamman Zaman, CEO of Meridian’s energy division, told The Energy Year.
Ghana Gas is working on the construction of a second gas processing plant north of the existing Atuabo gas processing plant. The asset is estimated to begin operations in 2024 through investments between USD 300 million-400 million. It will have an initial capacity of 150 mcf [4.25 mcm] per day that will be increased to 300 mcf [8.5 mcm] per day. These two processing plants send natural gas to thermal plants in the east. Eventually, a third processing plant will be able to send natural gas westwards towards Côte d’Ivoire.
Regarding natural gas transmission, the West African Gas Pipeline was the initial provider of natural gas to Ghana. As domestic natural gas production rose, it was key to develop the Takoradi-Tema interconnection project in 2019 that connected the National Gas Transmission Infrastructure Network to the West African Gas Pipeline, enabling the transmission of natural gas from western fields to industrial zones and thermal plants in the east.
Ghana Gas is also looking at new infrastructure in the upcoming two to four years to reach inland Ghana and neighbouring countries. Currently, most of the thermal power plants and transmission pipelines are around the coast. It is imperative the country move inland to provide more reliability to local power generation systems. With the help of compression stations, eventually it will be possible to build infrastructure inland to serve power generation assets in the north and give access to landlocked neighbours like Burkina Faso and Mali.
A keystone of Ghana’s energy security and natural gas supply is Tema LNG import terminal, composed of a floating regasification unit paired with a modified LNG carrier to receive, store and regasify LNG. The floating regasification unit arrived from China in January 2021 and will allow the supply of 1.7 million tonnes of natural gas per year to be used for power generation from 2022 onwards.
Eventually, LNG and CNG infrastructure will need to be developed to ensure further utilisation by local industries and logistics sectors. The government is currently developing a Gas Master Plan that will ensure the prioritisation of natural gas in power generation, industrial feedstock and transport fuel.

DOWNSTREAM UPGRADES: Ghana needs to revamp and construct refineries and pipelines and develop storage terminals for domestic and foreign oil products. Due to lack of infrastructure, Ghana’s crude oil has been mostly exported instead of being used for local socioeconomic development. New developments will help satisfy the increasing domestic and regional demand.
Traditionally, countries like Ghana have suffered bottlenecks in the development of their oil and gas infrastructure due to lack of know-how in the form of human resources and expert companies and the lack of financing tools. “In Ghana, we are trying to build capacity to address the issue of engineering and construction expertise.” Ben Asante, CEO of Ghana Gas, told The Energy Year.
Ghana’s petroleum downstream sector has grown continuously to match the country’s growing consumption of petroleum products, which rose from 2 million tonnes from 2005-2009 to 4 million tonnes today, representing 6% of Ghana’s GDP. In May 2021, the Ghanaian government approved the revamping of Ghana’s only refinery, Tema Oil Refinery (TOR), which has been running at a production capacity of 25,000 bopd since 2017 when a furnace exploded and forced the capacity down from 40,000 bopd.
TOR’s debts of more than USD 400 million since 2009 is a significant hindrance to the further development of the refinery. The government has largely covered payments, with USD 167 million towards the balance handed out by the public sector between 2009 and 2016.
However, TOR’s plans are minor compared with the ambitious goals set by the Petroleum Hub Development Corporation (PHDC). The entity was created in September 2021 and tasked with the creation of a USD 60-billion downstream hub. The project involves construction of three 300,000-bpd refineries that are expandable to 500,000 bpd, two oil jetties, two petrochemical plants and a storage facility in Western Ghana. The first phase will demand a USD 12 billion investment.
To cover the more immediate demand for petroleum products, the Takoradi Port inaugurated a USD 57.6-million liquid bulk terminal that is expected to cover around 50% of Ghana’s domestic petroleum consumption. The National Petroleum Act’s licence requirements for bulk distribution companies – currently granted to 42 companies – demands the construction of further storage infrastructure. The extra storage capacity will serve to accommodate products such as petrol aviation fuel and diesel from Nigeria’s 650,000-bopd Dangote Refinery, which begins operations in 2022.
However, the Upper West Region and Central Region do not have any developed storage infrastructure. “Those are new areas where we will eventually need projects. Our preference will be a public-private participation model – build, own, operate and transfer. Ghana is a virgin market for oil and gas infrastructure,” Edwin Provencal, managing director of the state-owned Bulk Oil Storage and Transportation Company, told The Energy Year.
To distribute said products domestically and internationally, Ghana needs to invest in pipelines. Ghana’s current distribution pipeline network is a mere 368 kilometres in length. A lot of investment is necessary, particularly to connect Takoradi to Kumasi and Accra.