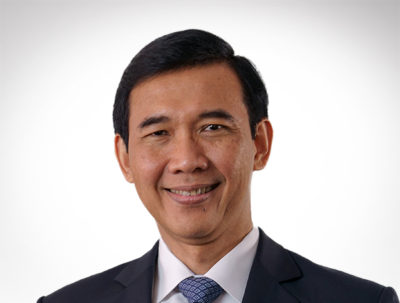 Apart from exporting LNG, we need to learn how to utilise it.

Didik Sasongko, president-director and CEO of Badak LNG, talks to The Energy Year about Indonesia’s drive towards being LNG-powered and solutions for small-scale LNG distribution in the Java region. Badak LNG is the largest LNG processing company in Indonesia and its Bontang facility is one of the largest LNG plants in the world.

How do you view Indonesia’s drive towards being LNG-powered and what challenges does it face?
Indonesia is still among the largest regional exporters of LNG, ranking third after Australia and Malaysia. However, apart from exporting this product, we need to learn how to utilise it. The government has the aspiration of reducing the use of oil as much as possible, especially diesel, and replacing it with gas. The problem is that we are major importers of diesel and LPG, which makes us fully energy-dependent. The government aims to replace LPG and diesel with LNG, but this is not easy.
There is a major lack of infrastructure for LNG transportation and utilisation. Another issue is that utility companies prefer coal over gas because it is cheaper. This makes the development of gas infrastructure more difficult. Nevertheless, for eastern and central Indonesia, LNG is going to grow quickly due to a predicted increase in demand by the year 2020 or 2021. As a result, Pertamina is developing a small-scale LNG facility.
The truth is that Pertamina can achieve its aim of increasing LNG capacity if the country does not suffer from another drop in oil prices. If the oil price rises to USD 100, it will be easier for gas to replace LPG and oil, but if it goes back down to USD 40, it will be a challenge because LNG and diesel prices will be somewhat similar.

How important is the Bontang facility for the country’s domestic supply of small-scale LNG?
In a few years, LNG exports are going to shift to cater to domestic demand. While Tangguh LNG will be focused on exports, as they have to make a long-term commitment for the new train they are building, the case of Bontang is different.
Bontang is a very strategic facility which will become the hub of domestic supply, distributing small-scale LNG to the domestic arena via ISO tanks, barges and small vessels. This will make it a very competitive facility. In this regard, Pertamina has already delivered LNG to six or seven points in central and eastern Indonesia, including Papua. These activities will increase and become regular with time.

What infrastructural complexities does Badak LNG find as the company looks at small-scale LNG distribution in the Java region?
Small-scale LNG in Java has big potential because there is demand. As of today, Badak LNG estimates there is now around 300,000 tonnes of demand per annum. However, to cater to the increasing demand, midstream facilities are crucial. On the one hand, pipelines are a farfetched solution as it would be very expensive to dig a pipeline in places such as Jakarta or in mountainous areas. It would be more effective to use small-scale ISO tanks, because there is an infrastructural basis in roads, trains and so on.
However, what we need is small or mini terminals of about 1,000 or 2,000 cubic metres for landing. Also, the LNG cannot come from Bontang as it would be very expensive. The key actor here is Nusantara Regas. We can take the gas to their facilities, transfer it to small scale and then deliver it using trains.

How important is Japan for the regional LNG market and what can it bring to Indonesia?
Japan has traditionally led the price of LNG, yet their demand has decreased radically since 2018. While it used to stand at more than 80 million tonnes per year, it is now at around 72 million tonnes. There are several reasons for this, such as the reactivation of its nuclear plants, but most importantly the fact that the country has implemented a strategic change in its LNG industry.
Interestingly enough, Japan wants to be a top LNG player by developing a regional LNG market – that is, making the market a production centre in itself. In order to do so, they are committed to building the infrastructure for this movement across the region to materialise this ideal.
This is clearly seen in Indonesia, where Japanese companies are building up the market. A clear example is seen in the Abadi LNG project in the Masela Block, where Inpex is investing heavily. In this sense, our country can enjoy their expertise in developing the grid and corresponding infrastructure. Japan has the expertise and they are filling in these gaps in know-how to develop the Indonesian market.

How would you assess Bontang’s potential versus its output?
The Bontang LNG plant is a crucial supplier for eastern and central Indonesia. It is an LNG hub in itself. As for the capacity of this complex, we have six LNG tanks, five LPG tanks, three loading docks, eight LNG plants with a total capacity of 22.5 million tonnes per year and one LPG plant with a capacity of 1 million tonnes per year.
However, our output has decreased substantially over the years due to the current state of the economy. While in our best year [2001] we achieved a production of 21,383,543 tonnes, in 2018 it stood at 8,440,000 tonnes. The reality is that the price of LNG currently is very low, which makes the cost of producing LNG more expensive than the market price, which is around USD 5 per million Btu. If it goes back up to USD 6 or more, our output will pick up again.
In terms of cargoes, our production for this year [2019] is around 130 cargoes. The majority of these cargoes go to Japan as we have a long-term commitment with them. Apart from that, we have plenty of different short-term and spot commitments.

What aims do you have to expand the company into the international arena?
This year [in 2019], Pertamina increased its stake in Badak LNG from 55% to 70%. In this sense, it is clear they want to make the facility a crucial national asset.
In addition to this, Badak LNG is focusing on being a world class LNG plant operator. We have more than 40 years of experience, bringing the know-how to provide world-class LNG services for operation, maintenance and technical excellence. In this regard, we have already provided startup and commissioning for Statoil’s Snøhvit LNG, Angola LNG, Yemen LNG, Freeport LNG and Cameron LNG in the US. Therefore, our steps towards the future are directed towards becoming a full-fledged international operator besides startup and commissioning and technical services.