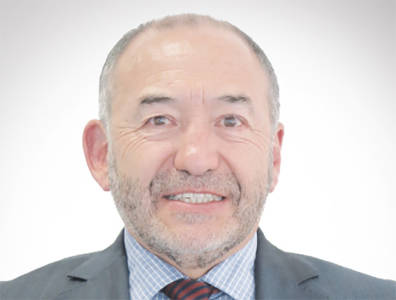 We need to keep exporting a portion of our production so that we have that channel in case we need it, but our main objective is to sell in Mexico.

Jose Luis Uriegas, CEO of Grupo Idesa, talks to TOGY about increasing production at the Braskem Idesa Petrochemical Complex (formerly Ethylene XXI), focusing more on domestic polyethylene sales, and the significance of US and European markets.

Founded in 1956, Grupo Idesa is a Mexican company that produces, markets and distributes various petrochemical and chemical products. The group has four commercial units: petrochemicals, distribution, logistics and coverings, and construction. Idesa offers ethylene glycols, propylene glycols, ethanolamines, plastics, plasticisers and anhydrides. The company also exports some of its products to markets in Europe, Asia, Central and South America and the USA.
In 2010, Idesa and Brazil’s Braskem established a joint venture called Braskem Idesa to build and operate the Braskem Idesa Petrochemical Complex in Veracruz. The USD 5.2-billion facility represents the largest investment in Mexico’s downstream sector in more than two decades. Braskem Idesa inaugurated the complex in June 2016, four years after construction began. At full capacity, the facility is capable of producing 1.05 million tpy of ethylene products: 750,000 tpy of high-density polyethylene and 300,000 tpy of low-density polyethylene.

On addressing shortages: “We have been suffering from a reduction in volumes of ethylene oxide because of the lack of ethane available throughout the sector. We are proposing to Pemex that we work together to generate incentives for Pemex Exploración y Producción to produce more wet gas.”

On objectives: “Our goal is to increase domestic sales by 50-60% in 2017 and 80% by the end of 2020. We need to keep exporting a portion of our production so that we have that channel in case we need it, but our main objective is to sell in Mexico.”

Most TOGY interviews are published exclusively on our business intelligence platform TOGYiN, but you can find the full interview with Jose Luis Uriegas below.

How will Mexico’s petrochemicals sector develop in the short term?
Petrochemicals consumption in Mexico is growing by 5% every year. The market is growing very fast.
There are two key elements needed for business in the petrochemicals industry: feedstocks and markets. We have the market and we have feedstocks, although we sometimes don’t have availability, but the reserves are there.
If we can resolve Pemex’s production issues of wet gas, we can build a bridge from now to five years, in which a mix of private producers of ethane will add production of feedstocks. Of course, we have other elements, such as technology, talent and human resources, but hopefully, we will continue to have good people in the sector.

How will the NAFTA renegotiations affect Mexico’s petrochemicals sector?
It’s not true that we are stealing jobs from the USA. That’s a political argument, but in our sector, our imports are worth USD 24 billion. We export just USD 6 billion worth of products. The word is that the trade deficit the USA has with Mexico is around USD 60 billion.
If we implement strict rules of origin in the region, we will make the region less competitive, but without the significant participation of some other regions. New jobs will be created if we can interlock our efficiencies and try to buy more from within the region. If we take this approach, we will have an even better agreement than we did before.
If NAFTA disappears, I don’t see the value chain that has been created between the USA and Mexico changing a lot. You can impose a tariff of 10-20%, but the market will readjust to take into account the additional cost, resulting in a loss for the final consumer, so it makes no sense.
Mexico has developed huge capabilities and skills that are very difficult to replicate within the USA. It’s a political issue and some change will come, but there will not be a crisis.

How are ethane shortages being addressed?
Hopefully, the Pemex platforms that were affected by several disruptions, such as the Abkatún platform that experienced an explosion in February 2016, will come on line again. These could add some additional volume.
Pemex is planning some projects to extract nitrogen from wet gas. Wet gas in southern Mexico has a high nitrogen content. The wells in Cantarell and some other fields were pressured with nitrogen to produce more oil and gas. Pemex separates the nitrogen from the gas in its offshore platforms. Then it extracts the liquids from the gas onshore and brings the gas back to the platform to use to pressurise wells.
About 70% of the ethane is extracted, but you can go all the way to 90% if you bring in new technology. If you combine the three elements – the platforms coming back on line, the nitrogen purification, and the cryogenics to extract more ethane, we don’t doubt that we’ll get enough ethane to produce 40% more than is currently being produced. This is going to take a couple of years.

Has Pemex been able to fulfil its obligations under the ethane supply agreement it has with Grupo Idesa?
We know Pemex doesn’t have the production it was envisaging, but it has been complying with the full volume we require. There’s no sign that will change. We have a good legal and political commitment from Pemex in terms of supporting such a big project in Mexico with the required raw material.
Political will and the legal aspect is also quite an important part of this. We don’t expect any lack of ethane for our projects. We are aware that there is not enough in Mexico for the rest of the industry. In other business areas, we are the largest consumer of ethylene oxide from Pemex. At the same time, we have been suffering from a reduction in volumes of ethylene oxide because of the lack of ethane available throughout the sector. We are proposing to Pemex that we work together to generate incentives for Pemex Exploración y Producción to produce more wet gas.
The basic problem is that wet gas production in the southern part of Mexico has been drastically reduced. In the short run, they thought it was not going to be that difficult because imports coming from the USA with the new pipeline infrastructure would cover the expected shortage. With Los Ramones and other pipelines in place, we are probably in a better position now than we were two to three years ago because of imports. In the case of ethane, it’s totally different.
We cannot rely on ethane because that’s dry gas coming from the USA. We are now producing around 110,000 barrels of ethane per day, but we really require about 140,000 barrels.

What have been Grupo Idesa’s key developments over the past 12 months?
After several years of investment, engineering and construction, we reached a new level with Ethylene XXI, following the difficult process of fine-tuning the plant from April to September 2016. This is not only a plant; it’s also a complex. It includes a cracker and three polymer plants, as well a large utility facility.
Since October 2016, we have seen a very stable production process at the plant, and in the past three months, we have been able to produce at 95% of the nameplate capacity, which is a very important milestone for us.
At the same time, we have been able to sell polyethylene, which is not an easy thing to do. We are producing and selling more than 3,000 tonnes of product every day, and for the past three months, we have been able to produce and sell above 80,000 tonnes per month.
2017 is a year to consolidate large investments we have been involved in. That doesn’t mean we’re not looking to begin developing several ideas. This year, our objective is to realise the effective operations of the projects we have.

What are the target markets for the polyethylene you produce?
At the beginning, similar volumes are sold to domestic and export markets because the large customers in the domestic market must get approval from their customers, as they are producers of specialised products along the value chain. At the start of operations, we were exporting more than what we expected. Our target is the Mexican market, which has a deficit of more than 1 million tpy of polyethylene. More than 50% of what we sell stays in Mexico. The rest goes to places such as Asia, Europe, Latin America and the USA.
Our goal is to increase domestic sales by 50-60% in 2017 and 80% by the end of 2020. We need to keep exporting a portion of our production so that we have that channel in case we need it, but our main objective is to sell in Mexico.

What is Grupo Idesa’s main focus in the domestic market?
Polyethylene has many different applications. We are focusing on the applications, which we feel have the best future and the best return for the market.
Luckily, in Mexico we have producers that are already testing our products. They did some tests before with imported products. Now we have the polyethylene here and they can test and fine-tune their machines to look for the efficiency and quality within their own products. That will mean that we will gradually sell more in Mexico and export less.

Which of Grupo Idesa’s export markets has the highest demand?
We will focus on the regions where we have a better strategic position. Europe is a very interesting market and you can get a better return. They don’t have natural gas in significant amounts. We have a free trade agreement, so we are already selling product without duties and building up customers whom we would like to supply on a regular basis.
The USA is also a natural market for us and I hope we can continue exporting without tariffs on chemical products.
Our main market should not necessarily be Asia. We can place whatever volume we have, but it’s not the best return. It’s not normally that loyal in the sense of building long-term relationships, but it’s very interesting if you have the volume. They will buy whatever you have, so that’s a good alternative.
We are thinking more seriously about building a long-term relationship in Europe and the USA, and in some ways, South America. We are working on a partnership in Brazil, and Argentina and Colombia could be two of our markets in South America.

With several petrochemicals projects coming on line in the next few years, will the USA continue to be a natural market for your products?
There is a lot of product coming on line soon, but the US market is very large. The volume we are thinking of placing in the USA in terms of the consumption and capacity there is less than 0.5% of US demand for polyethylene.
We’re targeting a few customers whom we would like to serve on a global basis. We see a better future for our exports in Europe. Global production will not grow, but demand is growing, so they will be importing from different regions. The Middle East pays duties and the US pays duties. At least Mexico has this free trade agreement.

For more information on Grupo Idesa, including the company’s petrochemicals partnership with Braskem or its E&P joint venture with International Frontier Resources, see our business intelligence platform, TOGYiN.
TOGYiN features profiles on companies and institutions active in Mexico’s oil and gas industry, and provides access to all our coverage and content, including our interviews with key players and industry leaders.
TOGY’s teams enjoy unparalleled boardroom access in 35 markets worldwide. TOGYiN members benefit from full access to that network, where they can directly connect with thousands of their peers.