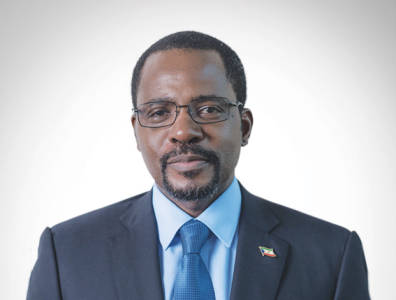 You can trip the first time, but if you do it twice, it is your fault.

Progress to applaud in EG

Gabriel Mbaga Obiang Lima, Equatorial Guinea’s minister of mines and hydrocarbons, talks to TOGY about the lessons learned from the global oil price downturn and the opportunities available due to recovering commodity prices. He also discusses the results of EG Ronda 2016 and its impact on Equatorial Guinea’s upstream sector, as well as necessary adjustments for future rounds.

• On the oil price downturn: “It taught us the significance of Dutch disease in regards to dependency on crude and thinking that crude will last forever. When things like that happen, you realise you should really plan ahead. Crises such as this happen in cycles. You can trip the first time, but if you do it twice, it is your fault.”

• On new projects: “The gas mega-hub is the newer terminal and it will prolong the life of the LNG and methanol sectors, and may be able to develop other industries. It is more than a horizontal diversification; it allows us to have a longer period of production, rather than slipping and having to stop because of a lack of resources.”

• On EG Ronda 2016 impact: “The proof of success has been that, especially with Kosmos and Ophir, one of the biggest seismic processing surveys in the Rio Muni area has been done. That is very positive because it guarantees that there is going to be a lot of drilling activity in the Rio Muni Basin in 2019.”

Most TOGY interviews are published exclusively on our business intelligence platform, TOGYiN, but you can find the full interview with Gabriel Mbaga Obiang Lima below.

What are the lessons learned from the global oil price downturn?
In 2016, there was a rapid decline in oil prices. That really had a huge impact in Equatorial Guinea because we are 90% dependent on crude oil exports. That had a direct impact on government revenues and projects. For 2016 and 2017, we had to readjust our national budget three times. It did not only affect the economy of the country, but also the IOCs, services companies and construction companies probably the most, because they have the most national hires.
2016 was not a very good year, but this experience was important to go through. It taught us the significance of Dutch disease in regards to dependency on crude and thinking that crude will last forever. When things like that happen, you realise you should really plan ahead. Crises such as this happen in cycles. You can trip the first time, but if you do it twice, it is your fault.

How did Equatorial Guinea weather the downturn in comparison to its neighbours?
The impact on Equatorial Guinea was less drastic than in neighbouring oil-dependent countries for two reasons: We had immediate measures to reduce the budget, rather than trying to compensate and maintain levels; and we also invested heavily in infrastructure. Doing this, we allowed other sectors to develop. We were not in a situation where projects stopped.
We praise the decisions and work of President Teodoro Obiang Nguema Mbasogo because during that period, we were able to make sure that basic infrastructure projects such as water, electricity, roads, etc were actually done. I do not want to say they were not impacted. We would have loved to do more, but when a situation like that happens, you have to stop and re-evaluate. It has been a good lesson for the oil industry. We have come to the conclusion that it doesn’t just affect EG, it affects the entire industry.
We have clearly readjusted pricing, which was too high. It was unreasonable. Now everyone is going towards reasonable pricing, reducing prices for some services. Now drilling a well is cheaper than it was two years ago, so that is positive.

What progress has been made on Equatorial Guinea’s main energy projects?
We did a lot of adjustment on projects we wanted to do. We used to have REPEGE [Petrochemicals Revolution of Equatorial Guinea], the Bioko Oil Terminal and even the refinery projects. Because 2016 and 2017 were difficult years, we either paused or cancelled some of the projects.
The only project we are kicking off and moving forward with is the gas mega-hub. This is the project to be able to use Bioko Island, and especially Punta Europa, as a processing area for other stranded gas, not only for the Alba plant.
We had a groundbreaking for the gas mega-hub’s first phase, which entails the backfilling of gas from blocks O and I, operated by Noble Energy, all the way to Punta Europa. For phase two, there will probably be other resources available. From there, we will go down the chain.
The gas mega-hub is the newer terminal and it will prolong the life of the LNG and methanol sectors, and may be able to develop other industries. It is more than a horizontal diversification; it allows us to have a longer period of production, rather than slipping and having to stop because of a lack of resources.

How has the project to utilise natural gas in public transport been advancing?
We finished that project and we have the buses, which we use whenever we have conferences. The biggest problem is the size of our market; it is too small. Thus, it tends to be very difficult to make an economical project. We have the buses and we have CNG for them.
We are approaching Total and GEPetrol to distribute CNG from stations. From there, we will start doing modifications on vehicles, maybe taxis first, so they can use LPG, CNG or even diesel. That is really the plan.

What is happening with Ophir Energy’s Fortuna FLNG project?
As any company that drills and makes a discovery, Ophir Energy is in a position to present the development plan to the ministry. Once that has been presented, the company needs to execute it, including bringing the funds. There are deadlines and if the company cannot meet them, then the ministry will take over the resources.
We are confident that Ophir is working very hard and that it understands the deadlines. The company has already given us confidence that it should be able to have an FID [final investment decision] before the end of 2018. If that does not happen, I do not have a problem. Either way, the state wins.

What is Equatorial Guinea’s role in the LNG2Africa initiative?
We have a project in the Acoga area of the country, where we have a cement plant. We are already developing it. The jetty is down, the ISO containers are in place and the pipeline is being built right now. We will be able to deliver the first results for LNG2Africa. Small-scale LNG will be delivered in ISO containers to the cement plant boiler and a 30-MW power plant.
We are developing the same project in Ghana, in which we will be able to supply small-scale LNG. We are going to do the same thing in Togo, where they can either build a power plant in Lomé and send electricity, or send LNG by truck. There are some delays and issues in Ghana, but we are confident that we should achieve first cargo by the end of 2018.
What has been the impact of Equatorial Guinea joining OPEC in 2017?
We joined OPEC to co-operate in stabilising prices, both for producers and consumers. We have achieved that. OPEC provides us with great information and knowledge that we otherwise would not have received. The future is in keeping up co-operation.

What were the results of EG Ronda 2016?
Taking into consideration that it happened in a very difficult moment, it was pretty successful. We had participation from companies such as Kosmos Energy, which was awarded a couple of blocks. Ophir and ExxonMobil were also awarded. The others were a bit more complicated because they did not go through all the due diligence and they were not concluded.
The proof of success has been that, especially with Kosmos and Ophir, one of the biggest seismic processing surveys in the Rio Muni area has been done. That is very positive because it guarantees that there is going to be a lot of drilling activity in the Rio Muni Basin in 2019.

Is the ministry planning upcoming tenders?
We have it in mind to present the next bidding round by the end of 2018. We will be focusing on ultra-deepwater.
At the same time, we are looking at going into a phase of doing tenders for already producing areas. Some of the contracts are expiring. We are deciding to give the first option to the operator for a proposal. If we see they are not at the level we want, we will go through a tender process where many companies can participate in presenting proposals to do something better.

What measures has the energy ministry taken to ensure local participation in the oil and gas industry beyond 2018?
We have created an alliance of national services companies, called Nasco. That has provided an opportunity for the ministry and local companies to be able to have a frank discussion about what is and isn’t working. That allows us to create programmes that will enable them to compete much better in that arena. We believe this has been successful. We agree with them that the ministry should be stricter in terms of local content.
We are implementing some measures. One of them is called the Walter International Programme. The idea is very simple. We take the first company that started drilling in Equatorial Guinea, we ask ourselves what we have done since then and what we are doing right now. We are trying to catch up.
Human resources are very important. You need to have people trained and prepared. Without people, you will never take off.
We are proud of the strategy of President Teodoro Obiang Nguema Mbasogo to heavily invest in infrastructure and projects, such that even though we are not the only ones in the neighbourhood with oil, we have the best infrastructure. That has been mainly because of the politics and strategy of His Excellency.

What is the government doing to attract more IOCs to the country?
The government recognises that the business climate is very important. You cannot just depend on having resources. You need to create an attractive climate. The registration process was taking too long. The government established a single window in which possible investors can register and get paperwork from a single place, and from there, co-ordinate with another one.
We are encouraging local companies to do more business activity. We believe that will have an impact. At the same time, we want the government to be engaged by attracting conference organisers to show our capability. We changed our Law No. 127, which mandated 35% local ownership for any international company. Now this only applies for the oil sector. In any other sector, any investor can come in owning as much as they want.
We have also been heavily investing in diversification into areas other than oil and gas, such as tourism and agriculture. We are pushing tourism very hard. It is not easy. Malabo in Equatorial Guinea is not the cheapest place to go.

FFor more information on the development of Equatorial Guinea’s oil and gas industry, see our business intelligence platform, TOGYiN.
TOGYiN features profiles on companies and institutions active in Equatorial Guinea’s oil and gas industry, and provides access to all our coverage and content, including our interviews with key players and industry leaders.
TOGY’s teams enjoy unparalleled boardroom access in 35 markets worldwide. TOGYiN members benefit from full access to that network, where they can directly connect with thousands of their peers.