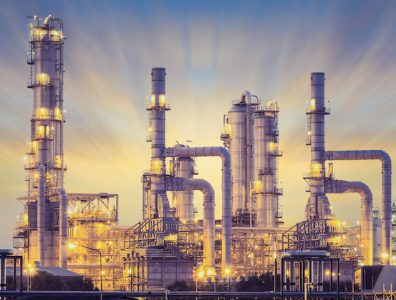 The Olmeca refinery has set a benchmark for national infrastructure and the future of industry.

Installed capacity of the refinery:340,000 bpd

Pemex’s Olmeca refinery has become a political and technological symbol of Mexico’s current industrial transformation. Known also as the Dos Bocas refinery, the project has met with setbacks, but has endured and set a new bar for what local infrastructure companies can achieve under Mexico’s quest to become self-sufficient in fuels.

The Olmeca refinery is a flagship project of President Andrés Manuel López Obrador’s administration. It lies on a 5.86-square-kilometre site near the Dos Bocas maritime terminal. The terminal delivers more than 8 million tonnes of cargo annually, the majority of which is related to oil and gas activities from the nearby Tabasco and Campeche fields. The Olmeca refinery is set to have an installed capacity of 340,000 bpd and produce 170,000 barrels of petrol and 120,000 barrels of ultra-low-sulphur diesel.
Site preparation began in June 2019, preceding necessary approvals given in August 2019 by the National Agency for Safety, Energy and the Environment to begin full construction. The original goal was to refine the first barrel at the site by the end of 2022. Although the first commercial refined drum has yet to see the light, construction of the gargantuan plant has continued to move forward.
Construction works of the facility comprises building 17 chemical processing plants, a 280-MW cogeneration power plant, administrative areas and intricate storage infrastructure, including 56 vertical tanks to store liquids and 34 spheres to store gas with a total combined capacity of 15 million barrels.
Considered the crown jewel of the government, the Olmeca refinery is the seventh and largest facility within the Sistema Nacional de Refinación and will greatly enhance Mexico’s crude processing when it becomes fully operable. With it, Pemex ties its near future to the refining business with the goal of reaching a crude processing capacity of 2.52 billion barrels by 2024.
BRICK BY BRICK: Pemex has adopted a holistic approach to the construction of the mega-project through collaboration and technical agreements. Planning and geological, geotechnical, environmental and bathymetry feasibility studies were carried out by local entities such as National Autonomous University of Mexico, the Federal Electricity Commission (CFE), Mexican Petroleum Institute (IMP) and Pemex.
The EPC work for the refinery was divided into six packages awarded by the Secretariat of Energy. The first package, awarded to Fluor Enterprises and ICA Fluor, included construction works for a combined plant and a coking facility, the latter of which has undergone delays.
The second package comprised construction of a diesel hydrodesulphurisation unit, gas oil hydrodesulphurisation unit, naphtha hydro-treating unit, and naphtha reformer by Samsung Engineering and Asociados Constructores DBNR. The duo were also awarded the third package, which consisted of constructing a fluid catalytic cracking unit and butane, pentane and hexane isomerisation plants.
The fourth package involved construction of water and gas treatment plants, including sulphur recovery and hydrogen production facilities, which was handled by ICA Fluor and Techint after the original contractor, KBR, pulled out in 2020. The duo was also awarded the fifth and sixth packages for construction of storage facilities and auxiliary services.
With an investment stretching far beyond the USD 8 billion initially budgeted, the endeavour has put pressure on both Pemex’s and Mexico’s coffers as the development has largely relied on federal funds. However, the facility is seen as a feather in the cap of Mexico’s administration as it moves towards creating a self-reliant national energy industry.

SETBACKS AND CHALLENGES: The Olmeca refinery was inaugurated on July 1, 2022, amid both fanfare and controversy. The actual startup of the project was to begin following a six-month testing phase that was expected to finish by the end of 2022. Officially, the facility is set to process 340,000 bopd in 2023 and reach full capacity in 2024. However, critics speculate that the complex may process limited volumes for several years following its startup.
The project’s construction has also been plagued by environmental and labour disputes. Environmental assessments have been questioned as the refinery is built on a preserved mangrove area. Construction work has caused deforestation and with it vast land floods that have delayed the project. Union clashes and labour strikes have also been recurrent over concerns regarding better pay and working conditions.
The building of the refinery has been a journey of cost overruns and discretionary spending. While the government says that budget overruns could range from 20% to 30%, other estimates put costs at up to USD 16 billion. Regardless, there are two major forces in play, the political and the technical, and discrepancies between both will determine when and how this undertaking will begin operations.

LOCAL CONTENT AND IMPACT: While it has met with delays, the Olmeca refinery is a genuine source of national pride and a showcase of local capabilities. The share of national content in the project stands at 72% and the complex has created around 35,200 direct jobs and more than 230,000 indirect ones.
The sheer size of the asset is groundbreaking for Mexico. The groundwork alone consisted of 30,200 piles and 55,400 controlled stiffness columns using 969,500 cubic metres of concrete and 74,200 tonnes of steel rod. To put this into perspective, this phase alone required the equivalent in concrete of 23 Azteca Stadiums and the steel of 10 Eiffel Towers. In the end, the entire complex requires a total of 1.97 million cubic metres of concrete, 405,000 tonnes of steel structures, 3,270 kilometres of linear pipeline and 24,000 kilometres of electrical cables.
The calibre of this venture represents a shift in the country’s energy paradigm, and has propelled Mexico towards an era of industrial transformation. The project has had a clear multiplier effect on the economy of the state of Tabasco and of Mexico, and now sets a benchmark for national infrastructure and the future of industry.