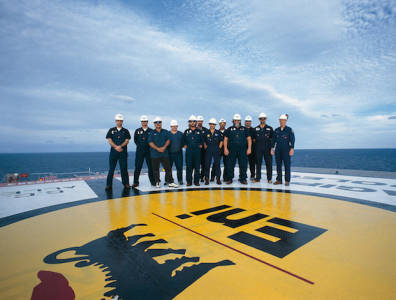 We’ll be performing around 60 well workovers in 2016, 50 onshore and 10 offshore, with the objective of optimising productivity and reliability.

In August 2015, the Italian super-major Eni made the largest gas discovery ever in the Mediterranean. For the third part of our series on the best projects of 2016, we look at Eni in Eqypt, Gazprom Neft in Iraq and Perenco in Gabon.

Largest gas discovery: Eni’s rapid work to develop the Zohr gasfield in the Mediterranean was named Offshore Development of the Year. The gasfield in the Shorouk offshore block is estimated to hold 30 tcf (850 bcm) of natural gas. Since 2015, six wells have been drilled. The development of Zohr gasfield is fast-tracked, and is supposed to come on line in late-2017. Eni plans to drill 254 wells, and expects to reach full capacity by 2019. At that point. the field is expected to produce between 70.8 mcm (2.5 bcf) and 85 mcm (3 bcf) per day.
In December 2016, Eni announced that Rosneft had acquired a 30% stake in the Shorouk concession. Subject to final approval from the Egyptian authorities, the deal is valued at USD 1.125 billion. Rosneft will also reimburse Eni for past expenditures, so far around USD 450 million, and maintains an option to net an additional 5% share in the concession.
In November, Eni had welcomed BP on a 10% participating interest in a deal valued at USD 375 million. BP, too, maintains an option to acquire an additional 5% stake.

Badra oilfield: The expansion of the facilities at Badra oilfield was named Project of The Year in The Oil & Gas Year Iraq 2016. On January 18, 2016, Russia’s Gazprom Neft announced it had begun operating oil processing train B, part of the Badra field’s central processing facility. Capacity was then increased to 85,000 bopd. Six months later, the company added yet more production capacity with the completion of train C.
Progress on the development has continued unabated since oil was first fed into the main pipeline system in September 2014. Well P-04 was brought on line in July 2015, bringing production to 35,000 bopd. A month earlier, well P-05, the fourth at the field, almost doubled total production to 27,000-28,000 bopd.
On September 24, 2015, the company said that a sixth production well, known as P-13, had been brought on line at the Badra oilfield, located in the Wassit province in eastern Iraq. Output from P-13 was pegged at 10,000 bopd and will be operated under free-flow production. With the new well on line, output at the field rose to 45,000 bopd. In June 2016, three more wells were completed and entered into production, raising production to some 64,000 bopd.
A plateau production rate of 115,000 bopd should be achieved no later than February 2017, according to non-operating partner Turkish Petroleum. Gazprom Neft expects that another four wells, P-10, BD-2, P-14 and P-19, will be ready in early 2017.

Offshore Gabon: Perenco, an international oil and gas independent originating from Singapore, was crowned Upstream Company of the Year. Perenco Gabon produced 70,000 bopd and an average of 54 mcf (1.53 mcm) of natural gas per day over Q1 2016. In 2014 and 2015, the company invested around USD 1 billion on deepwater exploration and the drilling of 40 onshore and offshore wells. The investments put Perenco in the position to be able to focus on the improvement of existing facilities in 2016.
“We’ll be performing around 60 well workovers in 2016, 50 onshore and 10 offshore, with the objective of optimising productivity and reliability,” managing director Denis Clerc-Renaud told TOGY in 2016. “This year we will also install a second mobile offshore production unit, the MOPU-B, at our Tchatamba field, located around 100 miles [161 kilometres] southeast of Port-Gentil. The infrastructure is next to the existing MOPU-A which has been operational since 1998.” Construction of the second platform began in March 2016, and is scheduled to be finalised in December 2016. Perenco is reportedly in the main candidate to acquire Shell’s onshore assets in Gabon.