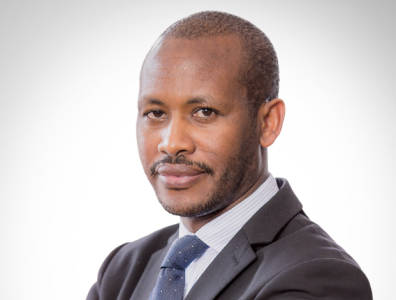 Peter Muliisa, chief legal and corporate affairs officer of Uganda National Oil Company (UNOC), talks to The Energy Year about opportunities in Uganda’s oil and gas industry from exploration to infrastructure. Established in 2013, UNOC is mandated to hold 15% in Uganda’s petroleum licences on behalf of the government.

How would you describe the progress Uganda has made to develop its oil and gas industry?
Uganda’s upstream journey started in 2006 when we discovered 320 million barrels of commercial oil in place. At that time, everybody thought the country’s upstream development would go fairly quickly. However, it has taken more time than we thought it would to get things going. The companies that carried out the early exploration works were mostly small independents. Total and Chinese national oil company CNOOC entered the market in 2011 and we were successful in quickly developing the legal framework and regulatory regime for them to start working.
In the past 14 years, the volume of the country’s commercially recoverable oil reserves has gone up to about 6.5 billion barrels in place. That is a significant number for a country like Uganda. By 2015, we had a sound legal framework in place.
Our agreement with Total, CNOOC and Tullow was that we would commercialise the crude explored in two ways, through an inland refinery that would process 60,000 bpd and via a pipeline to the sea and land for the international market. The latter required us to look at how the pipeline would be developed and it has since become a major private-sector project, with Total, CNOOC and Tullow as key players of developing the asset.
In 2017, the presidents of Uganda and Tanzania signed the intergovernmental agreement for the construction of the 1,445-kilometre East African Crude Oil Pipeline [EACOP] from Uganda to Tanzania’s Port of Tanga. However, there were key agreements left to be finalised. The good news is that in September 2020 the two nations completed the host government agreement, which represents significant progress towards achieving an FID both upstream and on the pipeline by the end of 2020. Every stakeholder involved in the project is working towards that target.

How has the Covid-19 crisis affected the country’s ongoing energy developments?
When the dual shock of the coronavirus pandemic and the oil price slump hit us, we thought it was not the right time to promote new investment opportunities and we feared not being able to achieve the FID. Since then, it has been an exciting journey towards what we may as well consider to be the greatest milestone in the country’s energy development, in the midst of one of the worst global economic crises. Today, we remain confident about achieving our objectives.
We are working on the refinery and some small storage terminals that we want to build across the country. Uganda is a landlocked country and we have to address petroleum supply chain security because we rely heavily on Kenya and Tanzania for imports. About 95% of our petroleum imports are coming from Kenya. If anything happens to that route, our whole economy will be at risk. We know that we need to build bigger storage terminals to improve our security of supply, even before the refinery is concluded. At the moment, we are building one terminal that will hopefully be followed shortly by additional ones.
We believe we should be able to take an FID on the refinery by February 2022 and it could start operating four years after that. We hope these developments will be a catalyst to spur some level of industrialisation for the country as a whole.
We have secured a piece of land in Kabaale, in the Hoima district close to where the refinery will be situated, and we want to build a petrochemicals industrial park there to produce items we are currently importing, create new jobs and improve our supply chain. All of these projects generally depend on the upstream development and the timeline of the EACOP construction.

What is being done to attract FID into the country’s energy industry despite the global economic crisis?
It’s tough to attract investors at the moment. In Uganda, we offer greenfield developments, which can be an advantage but also challenging for investors. We know that we have no infrastructure, no pipeline and no refinery and we are almost 1,500 kilometres from the sea. Yet the lack of these assets will also allow international investors to implement state-of-the-art technologies and processes from scratch.
We currently have three operated licences. The first licensing round we introduced was not too successful as it attracted only a small number of companies. Our second licensing round, offering five blocks, was closed on September 30 and the government will release the list of applicants shortly. These rounds play an important role in attracting companies to find more crude to sustain the pipeline and refinery developments going forward. We need to be able to replace what will be produced.
We hope that the recently finalised EACOP deal will incentivise more companies to come in and invest. We have been capturing data near the border with Kenya and have more quality information available every single day. That information will also help the investors’ decision to enter the market.

How do you think the mandate of NOCs has evolved in African frontier markets?
It’s true that many NOCs suffer with mandates that are not necessarily commercially oriented and that creates a challenge. Oftentimes, we are expected to deliver commercial results but our mandates include non-commercial elements. Uganda did a lot of benchmarking by looking at other African nations when developing our upstream laws and putting in place our legal framework. We realised there were lessons to learn as to what worked or did not work for other governments and NOCs. We placed a lot of emphasis on trying to avoid making the mistakes other nations did.
Today, UNOC is focused on commercial aspects, the Petroleum Authority of Uganda is in charge of regulation and the task of policy development for upstream blocks has been retained by the Ministry of Energy and Mineral Development. In carrying out these tasks and responsibilities, each entity has its own focus areas and is expected to deliver upon expectations.
As a commercial NOC, our targets are commercially driven and our shareholders (the government) expect commercial returns. We are active across the entire supply chain, including upstream, midstream and downstream. We could focus on only one or two segments but the challenge is that most of the country’s crucial hydrocarbons projects are about to be developed at the same time, so you either pursue them now or you probably won’t be able to.
The ability to structure yourself as an NOC is truly important and that is why we have decided to incorporate two subsidiaries. One focuses on the refinery and the industrial park, while the other is in charge of the storage terminals and the pipelines. Both entities have a board and management team and there is the holding company on top of them to make sure their mandates are being met. We are comfortable with the current structure in place and hope to be able to generate shareholder value.

What message would you send across to international investors about business opportunities in Uganda?
Uganda is ready and it’s probably one of the best areas in which to invest in Africa today. Our exploration works have reported an 85% success rate, one of the highest in the region, and the large majority of our exploration areas are still waiting to be licensed.
EACOP is a major milestone to support our hydrocarbons projects and we have put in place a stringent provision on access, making sure that any entity will be able to ship the crude that they have explored.
We have a specific legal regime that is designed to make activities profitable. We also have a stable tax regime, which, although it’s still young, has been tested and has proven to be working well.
We also have the youth capacity, both in the government and the private sector, to help propel the domestic energy sector forward in the years to come. Any company entering Uganda will enjoy significant government support and access to a competitive and stable legal regime.
I would encourage all oil companies and investors to come and partner with us as we are convinced that we can achieve great things together.