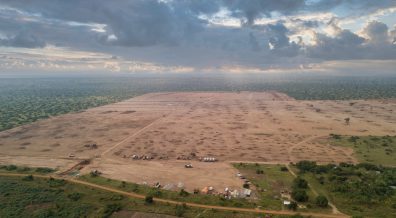 “Now is the time. Uganda is the right destination for investment.” As H.E. President Yoweri Kaguta Museveni has said, 2022 represents a significant milestone in Uganda’s oil and gas developments and by extension the potential to drive growth in other economic sectors linked to the production of hydrocarbons in the country.

The announcement of the FID in February 2022 for Uganda’s oil and gas projects involving TotalEnergies, China National Offshore Oil Corporation (CNOOC), Uganda National Oil Corporation (UNOC) and the Tanzania Petroleum Development Corporation (TPDC) signalled a major achievement in Uganda’s path to first oil, which is expected in 2025.
In April 2021, Uganda, Tanzania, TotalEnergies and CNOOC had signed three key agreements towards the development of the Tilenga and Kingfisher projects and the East African Crude Oil Pipeline (EACOP): the Host Government Agreement, the Share Holding Agreement and the Tariff and Transportation Agreement for the EACOP, which will transport the crude oil from the Lake Albert projects to the Indian Ocean port of Tanga in Tanzania.
When Hardman Resources made the first commercial discovery in 2006, the find’s estimated commercial resources were 300 million barrels of oil. By 2011, Total and CNOOC entered the market and the sector saw a quick development of the regulatory and legal framework to improve investment conditions. After the exploration of only 40% of the basin, the country’s estimated reserves skyrocketed to 6.5 billion barrels of oil, of which 1.4 billion are currently deemed recoverable, mostly focused on the Lake Albert projects. The country’s drilling success rate is among the world’s highest at 88%, Petroleum Authority of Uganda (PAU) executive director Ernest Rubondo told The Energy Year.
Currently, the Lake Albert project shareholders are TotalEnergies, with a 56.67% stake (operating the Tilenga Project in Contract Area 1 and License Area 2 North); CNOOC, with 28.33% (operating the Kingfisher Development Area); and UNOC with its minimum 15% mandated share. The development of the Kingfisher and Tilenga projects, plus the Kabaale refinery and the EACOP, are expected to require USD 15 billion-20 billion in investment over the next four to five years, of which at least 40% is slated to remain in Uganda.

TILENGA: The Tilenga Project, operated by TotalEnergies EP Uganda, covers three production licences in Contract Area 1 – Jobi-Rii, Gunya and Ngiri – and three in License Area 2 North: Kasamene-Wahrindi, Kigogole-Ngara and Nsoga. The total expected production of these fields is 190,000 bopd.
The project will comprise more than 426 wells with more than 160 kilometres of flowlines connecting the fields to the central processing facility (CPF). The CPF will have a capacity of 190,000 bopd, and will be connected via a 24-inch, 95-kilometre pipeline to the Kabaale refinery.
Following the February 2022 FID announcement, major contracts were announced and contractors were mobilised. Tier 1 contractors include McDermott, Sinopec, ZPEB, Vallourec and Mota-Engil Uganda. Drilling rigs are currently under construction in China and the first is expected to arrive in the second half of 2022 so that drilling can kick-start in December 2022.
In January 2022, GCC Services signed a six-year contract with international engineering and construction company McDermott to provide camp services for the upstream facilities at the Tilenga Project beginning the following month. Works include camp management, catering and camp support services for the workforce on the project, which is estimated to consist of up to 3,500 international and local workers.
Immediately after the FID was announced, Mota-Engil Uganda was awarded three contracts worth USD 261 million for works on the Tilenga Project. These include two contracts from TotalEnergies for preparation of well pads and related infrastructure. The third contract was awarded by McDermott in consortium with Sinopec for general civil works.

KINGFISHER: The Kingfisher project is operated by CNOOC. The Kingfisher Development Area (KFDA) covers the Kingfisher field in the area formerly known as Block 3A, located in the Kikuube district, and there are future plans for tie-ins of the Mputa-Nzizi-Waraga fields in the Hoima district. The total production expected from these fields will be 40,000 bopd.
CNOOC obtained the production licence for the KFDA in September 2013, and the Environmental and Social Impact Assessment certificate in February 2020. The upstream development will comprise 31 wells to be drilled in four well pads, as well as a 40,000-bopd CPF fed by 19 kilometres of flowlines. Midstream-wise, a 46-kilometre pipeline will connect the CPF to Kabaale.
After the announcement of the FID, Uganda’s Excel Construction kicked off the construction phase at the Kingfisher project involving building well pads, access roads and water intake points.
Both the Tilenga and Kingfisher developments, whose combined output is expected to reach 230,000 bopd, will be connected via feeder lines to the UNOC-managed Kabaale Industrial Park near Hoima. The Kabaale Industrial Park will comprise an international airport, expected to be operational during 2023; Uganda’s crude export hub, from which EACOP will start; a 60,000-bpd refinery, whose FID is expected in 2023 and its completion in 2027; and an industrial park.

EACOP: The EACOP will require a USD 3.5-billion investment for a 1,440-kilometre, 216,000-bopd capacity pipeline that will export crude oil from Kabaale in western Uganda to the port of Tanga. The EACOP will be the world’s longest electrically heated crude oil pipeline, allowing the transportation of Uganda’s high-viscosity oil. The pipeline will be managed by the EACOP Company, formed by operator TotalEnergies (62%), UNOC (15%), TPDC (15%) and CNOOC (8%).
In May 2022, Bolloré Logistics announced it had been selected as the main logistics contractor services for the EACOP. The project’s materials and equipment will be discharged in Dar es Salaam, Tanzania, and transported to different locations in Tanzania and Uganda. Works involve end-to-end receiving, storage, handling and transportation of hundreds of thousands of cubic metres of cargo, including over 80,000 joints of 18-metre line-pipe, multiple heavy-lift operations and break-bulk and containerised cargo transportation.
Other contractors for the project include China Petroleum Pipeline Engineering for construction of the pipeline, feeder line and aboveground installations; the Daqing Oilfield Construction Group for construction of the terminal and tanks; SNEF-Schneider for electrical instrumentation and control of telecom security; BBN for construction of the jetty; and ISOAF Tanzania for provision of the thermal insulation of the pipeline. Engineering firm Worley is in charge of the engineering, procurement, construction management and commissioning.
In July 2022, the operating company submitted a request to the government of Uganda to begin construction activities of the pipeline. According to officials in Uganda’s Ministry of Energy and Mineral Development, the submitted application was to be approved before the end of 2022.

THE RIGHT APPROACH: The development of capacity and expertise in waste management represents a key topic in Uganda’s nascent oil and gas sector. In the exploration and appraisal phases of the projects alone, around 34,000 tonnes of drill cuttings and 5,700 cubic metres of drilling fluids were generated and safely disposed of.
EnviroServ, a waste management company, in 2014 built its facility in Hoima, which includes a laboratory to test incoming wastes, a sewage treatment plant, a landfill engineered to international design standards and a contaminated stormwater dam to contain run-off from the site. The treatment plant also has 11 boreholes around the landfill that are used to monitor the groundwater quality and ensure no contamination of groundwater occurs.
Education, training and capacity building are also important topics directly linked with the goal of reaching a 40% share for national content spend. The Uganda Petroleum Institute Kigumba is an example of the country’s efforts to create educational institutions in the Lake Albert region that cater to the oil and gas sector’s technical needs. The Uganda Industrial Research Institute, located in the Namanve Industrial Park in Kampala and created under the Ministry of Science, Technology and Innovation, is another instance of an institution vying to maximise efforts to train Ugandans in skills needed to nurture a competitive industrial sector in the country.

FURTHER EXPLORATION: Armour Energy Uganda, a subsidiary of DGR Global, returned to the Kanywataba field in August 2021 to resume its exploration campaign after a force majeure was declared because of heavy rains and flooding in 2019. In March 2022, its 2D seismic data operations were finalised and the company began the procurement process for a data processing contractor. An invitation for expressions of interest for drilling services was also published, with an earliest drilling date in Q1 2023 if data processing results in a positive assessment of the block. Armour Energy Uganda’s parent company, DGR Global, was also shortlisted to be awarded a new exploration licence for a separate block under the second oil and gas licensing round launched in 2019.
Uganda’s NOC UNOC was also shortlisted for the Kasuruban block, which is the company’s first independent bid for a licence. As of June 2022, UNOC was finalising negotiations for its production sharing agreement. In April 2022, UNOC and CNOOC also signed a joint application agreement for the Pelican-Crane block in the Lake Albert region.
Beyond the Albertine Graben sedimentary basin, the Ministry of Energy and Mineral Development is conducting exploration studies in the Kadam-Moroto Basin, in the Karamoja region. Other exploration works are being considered on Uganda’s remaining basins in Uganda include the Hoima Basin, Lake Kyoga Basin, Lake Wamala Basin and Lake Victoria Basin.