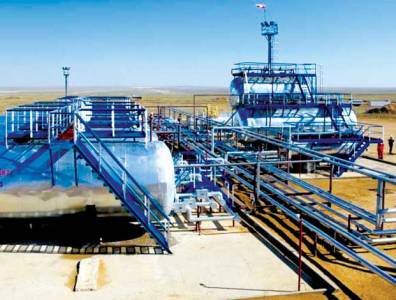 Canadian oil and gas operator Condor Petroleum drilled their second horizontal well at the Zharkamys West 1 block on November 2014. The Shoba 11 well, located in the Aktobe oblast, was drilled to a depth of 1,327 metres inclusive of a 398-metre horizontal section. Results showed that 97 percent of the logged horizontal section is oil play with porosity averaging 22 percent and oil saturations at 76 percent. The well went into continuous production at the end of 2014.

Shoba 11 follows the Shoba 10 well, which was drilled in September 2014 to a depth of 1,206 metres. On December 18, the company announced that Shoba 10 had been averaging a flow of 165 barrels of oil per day (bopd) for the past 30 days. Production data put the well’s absolute open flow at 650 bopd.

These activities are part of phase one of the company’s project at the Zharkamys West 1 block. This consists of drilling to a depth of 1,500 metres at the Kiyaktysai, Shoba, Taskuduk and Ebeity wells and putting these discoveries into production in 2015. In the final quarter of 2014, the Shoba wells were producing at an average rate of 312 bopd. The company has said the Shoba 11 is performing well compared to Shoba 10’s early rates.

DRILLING ACTIVITIES: The second phase of Condor Petroleum’s project at the Zharkamys West 1 block consists of drilling to a depth of up to 4,500 metres in search of deeper and higher impact post-salt prospects. Despite being unsuccessful with its drilling activities at the Zhaman Koblandy two (December 2011), Kiyaktysai North East one (November 2012), Shoba 201 (September 2012) and Ebeity East 201 (June 2012) wells as part of the second phase, Condor Petroleum discovered oil at the Kiyaktysai well in 2013.

The Kiyaktysai North East 205 well was drilled with the intention of further appraising the oil discovery and reached 1,876 metres in December 2014. The company has plans to drill at the 4,600-metre-deep Kiyaktysai North 501 well in 2015 where total unrisked mean recoverable resources are estimated at 50 million barrels of oil equivalent.

Meanwhile, the company estimates that peak production at the Taskuduk and Shoba wells is between 1,200 and 1,300 barrels of oil per day, with commercial production at Taskuduk expected in first quarter of 2015 once it has been granted a commercial licence.

FUTURE PLANS: In the third phase, Condor Petroleum is intending to pursue pre-salt structures by drilling to a depth of 7,000 metres. The company indicated it would be interested in establishing a joint venture with an operator that has more experience with working in pre-salt plays, and intends to start its drilling programme in the second half of 2015. In addition, the Sagiz terminal, located 12 kilometres from the Zharkamys West 1 block, will facilitate the transportation of oil to the domestic market in the near future.