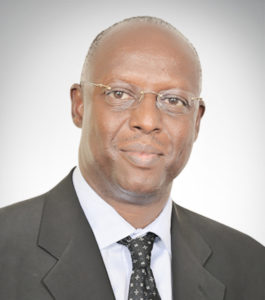 The building of the pipeline will answer a lot of questions, including the viability of the port of Lamu, land acquisition on that corridor and constructability. It will also answer the security issue as well.

Projected date of completion of the the South Sudan-Kenya pipeline:end of 2020

TOGY talks to Andrew Kamau, the principal secretary of Kenya’s State Department of Petroleum, about the South Sudan-Kenya pipeline agreement and the stages of the project as well as the country’s plans for training and local content development. He also discusses economic co-operation with Chinese businesses and ongoing exploration efforts in the country.

What has the response for the FEED and the ESIA?
Those have received expressions of interest, which we shortlisted, and the tender should be out in the end of July. Once that goes out, we are hoping to award it by the end of October.
The FEED is not so big; [it will take] maybe a year. However, the ESIA is more critical. Because of the IFC [International Finance Corporation] rules, you need four seasons, which is 12 months, and then six months for evaluation. That’s 18 months, which is great because once we’ve done the FEED and it’s evaluated, we can award it and start construction the day we receive the ESIA certificate. We’re looking at Q2 2018 and completion by the end of 2020.

Could you extend the pipeline to Ethiopia?
It makes sense. Of course, a regional pipeline in terms of Ugandan barrels coming through Kenya will make more sense as the Ugandans only have to build 700 km rather than 1,400 km. Of course you can’t ignore the concerns regarding security given Total’s past experiences in Yemen. At the end of the day, we want to build a products pipeline from Lamu to where the road from Addis ends in Isiolo to mitigate those sorts of things.
The building of the pipeline will answer a lot of questions, including the viability of the port of Lamu, land acquisition on that corridor and constructability. It will also answer the security issue as well.  The products pipeline will be operational in 2020, a year ahead of the pipeline, including the jetty, pipeline, port facilities and tanks.

What kind of other porjects are you working on to make the country attractive for foreign investors?
You’d be surprised. We have a lot of people investing already, including the Africa Development Bank and other development banks.
We have a lot of projects on the go, including standard gauge railway line (SGR) from Mombasa to Nairobi, which is six months ahead of schedule and should be done by June 2017. We will be running two lines at the same time, the meter gauge and the standard gauge.
We have a very ambitious transmission line project ongoing, and the private public partnership is working very well. Don’t forget we already have our own Kenyan Pipeline Company, which contributes USD 230 million per year. State and private companies speak for themselves in the kind of return on an asset you can get.

What kinds of development will be involved in your impetus to export 2,000 barrels of oil per day by July 2017?
It’s part of the extended well test. Our reservoirs are complex. We have to do water flooding, and we have to look at recoverable reserves and well depletion. Either we’ll build new tanks, as we already have 60,000 barrels in tanks in lockup, or we’ll transport crude oil to Mombasa and store it there. That’s really more of a pilot project to test the route.
When it comes to full field development, we are going to have to use that same route to move all of our crude processing facilities and the pipe through the corridor. We have to test it to make sure it works and is viable. In addition, we want to create some employment for locals in Tukana, including skills development.
This development will mean we can start our drilling campaign at the end of this year. We have four wells and options on four more, taking us to eight wells. That may take us into the production and appraisal phase.
At that point, there is the issue of local content. We have been trying to be proactive as a government department to help oil companies meet their local content requirements. We have a well-educated workforce, and that’s on the engineering side at a university level. We are looking to develop the artesian skills for welders, electricians, pipe fitters and people in construction.

What have you been doing to educate locals for work in the oil and gas industry?
We have a lot of vocational colleges. The challenge is that there has been no meeting of minds between academia and industry. The schools are just churning out mechanics and welders without talking to the industry and finding out what is in demand. What that means is that there is no point putting people through a two-year course.
We decided to use competency-based training. We sat down and worked out a curriculum based on the skills required and talked to the industry to find out what was in demand. Then, we talked to the people who had already been through the tertiary institutions as to where they have gaps in skills. Is it HSE, ability to weld or basic certification on instrument control?
You can cut the process from two years to six months with those skills. That is what we are working on, and we have conducted a skills gap study to find out where the gaps are. Oil companies have invested in vocational training colleges, and a lot of people are looking at that. There are private colleges that are keen to develop those skills because for them it’s a business.

How does this education transfer into Kenya’s industry?
We work with oil companies and let them come up with a plan to meet the 40% requirement [for local content]. We then start talking to manufacturers and other people to meet the requirements. For them it makes business sense. We have a low oil price and slowdown in exploration, so we have time to regroup and start the training process.
Additionally, skills in oil and gas are portable. We know the Kenyan workforce is happy to work in South Sudan, Somalia and all neighboring countries, and they do. Many years ago we started a hotel school for Kenya, but today it churns out a lot of qualified people for places like the [United Arab] Emirates. Kenyan students and workers are well received in the workforce. This could be the beginning of something interesting.

What does it mean for Kenya as a country to begin exporting crude for the first time?
Crude is coming at a time when Kenya has moved onto a middle-income country. We are about to have universal power access in all households and infrastructure is reasonably well developed, although it could be better. We are now using oil revenue to enhance the development and use it in a clever way. We’ve seen some mistakes that have been made in the past. This gives us an opportunity to be smart about how revenue is used, and I think it’s coming at a good time.

Has attracting investment been more difficult during this period of low oil prices?
I think the timing is lucky because when we come to building infrastructure, commodity prices are low. We have said that prices will remain low until we get a chance to buy our pipe. If we went looking for pipe manufacturers at the height of oil revenue, there were long lead times for pumps and pipes as well as high costs. Instead of spending USD 1.7 billion dollars on pipes, we would be spending USD 2.6 billion. It’s fine with high oil prices, but if we invest now, the prices can only get better. This is the lucky part.

How do you view the security situation and convince people that it’s not an issue?
There are really two risks to a pipeline. The first is seismic and earthquakes, and the second is people. Because this pipeline is passing through areas with low populations and we don’t have seismic, our ability to protect the pipelines is much improved.
Additionally, the pipeline is buried. If you have ever seen a buried pipeline, you need markers to show you where it is, otherwise it gets lost. There is a lot of monitoring technology for people coming too close and we can have a system to stop them.
If you look at terrorism in Kenya and the border with Somalia, most of the targets are human beings and not infrastructure. We feel that’s another thing for consideration.

Where do you see opportunities to work with China to develop infrastructure?
China is very well represented in Kenya and they’re funding the biggest capital project, which is a pipeline. Additionally, the standard-gauge railway was funded and built by the Chinese.
I think Chinese investors know Kenya very well. I think the movement is going away from government funding and towards state corporations and the private sector, more in terms of financeable projects than social projects. We need financeable projects that can get a return on their cash. Given all the infrastructure we have put in place and the level of a corporations in terms of money, it’s now quite attractive.

Will most of the exports in the East Africa region cater for the Asian market as well?
I think so, yes. The other thing is that the focus is not so much on the funding, but on partnering with Chinese companies to do manufacturing, especially on energy-hungry projects. For example, we are building a 100-MW coal-fired power plant in Lamu, and some of the funding is coming from China. We will be speaking to China to bring in some of the manufacturing to places like Lamu, where you have cheap power.

For the operators, Tullow, African Corporation, Maersk and Compañía Española de Petróleos (CEPSA), what level of exploration is going on right now?
CEPSA have just finished drilling their well in northern Kenya, the last well that was drilled. Kenya is very new. We have only drilled 80 wells, and we already have 750 million barrels of recoverable [reserves], which is great. We are in the discovery phase right now. I think by the middle of next year, after we start a new drilling campaign, we will be at 1 billion barrels.