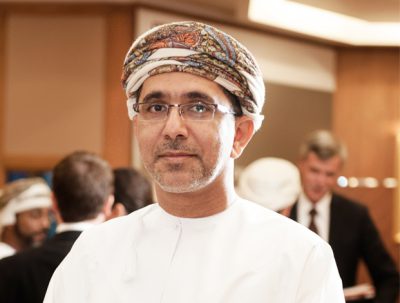 Price per barrel used for calculating oil revenue in 2015$75

Oil prices: a view from Oman

Do you think OPEC’s refusal to reduce oil production in November 2014 was driven by political rather than financial reasons?
OPEC’s decision to maintain the production of oil is mainly a fight for market share and a choice to allow the market to determine the price of commodities, including hydrocarbons, rather than interfering in this.
Prior to November 2014, OPEC used to try to maintain reasonable prices for oil through a reduction in production when this was deemed necessary. However there are new players in the market, and since 2011, the market share of non-OPEC producers has been increasing.
If OPEC allows other producers to dominate the market, its ability to dictate or influence the price of crude will fade away. It is becoming clear that those who cannot sustain low oil prices will leave the market, and those who have a low unit production cost will survive. OPEC’s decision is an economically driven one.

To what extent did the drop in oil prices affect Oman’s budget?
Oman takes the crude oil price from the market, and as a small producer, we do not have the power to influence prices. So we receive the oil prices as set by the market and of course since we depend mainly on oil income to finance our budget, any drop in these affects us. We think that a price of $90-100 per barrel is reasonable for both the consumer and the producer.
Advanced economies with strong manufacturing sectors are benefitting significantly from the recent oil crash. Diversifying and reducing dependency on the oil and gas industry has been an objective of Oman’s government since the Vision 2020 initiative was launched by H.M. Sultan Qaboos bin Said Al Said in 1996.
The high price of crude over the past five years has dominated Oman’s economy and contributed heavily to the government’s revenue. Nonetheless, the contributions to GDP by other sectors are increasing. Non-hydrocarbons activities recorded a 10.1-percent growth in 2014. And in 2015, we expect a 5.5-percent growth in non-oil activities.
There is no shame in confirming that lower oil prices are sometimes needed, and should be observed as a wake-up call. When oil prices are high, there isn’t a necessity to innovate and produce new products and services.

Many oil-rich nations privatise national oil companies during financial crises. Will this be the case with Oman?
A committee chaired by the minister of financial affairs is examining the possibility of privatisation. After the successful privatisation of telecommunications company Omantel in 2014, the government has drawn up plans to further reduce its interests in several state-owned enterprises. However, companies will need to sustain a few years of profitability before going public.
The Oman Oil Refineries and Petroleum Industries Company has already announced to the media that it is preparing for partial privatisation. We expect around 15-20 percent of the company’s shares to be offloaded. Oman Oil Company subsidiaries such as Abraj Energy Services are also studying the possibility of denationalisation through an initial public offering.

Will low oil prices force a slowdown in projects?
Most of the projects will be maintained, especially projects in the oil and gas industry as they are largely self-financing. The government should not delay projects that will contribute to adding value.
However, we are reviewing some projects that are not a priority. It is important to list companies in order of their benefits to the economy and society. Those concerned will be the ones that do not bring job opportunities and do not generate economic or social value.

For more news and features from Oman, click here