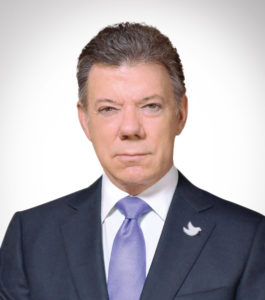 The hydrocarbons industry is fundamental for the consolidation of a peaceful, equitable and better-educated Colombia.

Government revenue generated by oil and gas industry between 2010 and 2014USD 39.6 billion

Towards a better Colombia

Low oil prices have posed a tremendous challenge to Colombia’s hydrocarbons industry, creating a ripple effect felt throughout the country’s entire economy. President Juan Manuel Santos speaks to TOGY about the measures the government has been taking to increase competitiveness in the industry, as well as the importance of oil and gas for Colombia’s socioeconomic development.

How is Colombia’s hydrocarbons industry coping with the drop in oil prices?
Colombia is no stranger to the current storm in the global economy. However, the hydrocarbons industry embodies the trust of investors in a country like no other. Investor trust has been maintained with economic accomplishments, such as 3.2% growth in Q3 2015. Total investment in Colombia is more than 30% of our GDP. We have a long-term structural vision that has allowed us to maintain our output of 1 million bopd, as well as our reserves, production levels and investment. The recent start-up of the Cartagena refinery is also a landmark in Colombia’s economic and social development because it is one of the most modern refineries in the world.

What has been the impact of the drop in oil prices on Colombia’s finances?
A barrel of oil won’t sell for USD 110 or USD 120 for a while, so we need to get used to this new environment. Even though we never suffered from Dutch disease, the hydrocarbons industry has managed to generate 20-25% of the country’s income. The challenge now is to turn problems into opportunities, and that is what we are doing. We have taken bold measures without acting irresponsibly. While we have adjusted our investments and budgets, we have also set in motion a plan for boosting employment and productivity to bring dynamism to the economy, which has proven to be effective. We have taken measures such as the modification and extension of contracts and allowed the high prices clause, which increases payments to the government when prices are above an estimated price, in the oil and gas industry. We have maintained Customs benefits, creating offshore free trade zones and introducing a model of permanent licensing rounds, as well as new measures to speed up the granting of environmental licences.

What is the socioeconomic importance of oil and gas to Colombia?
The hydrocarbons industry is fundamental for the consolidation of a peaceful, equitable and better-educated Colombia. Just between 2010 and 2014, the industry generated COL 115 trillion (USD 39.6 billion) in government revenues, including royalties, dividends and income taxes. The results are evident. Colombia has reduced poverty and extreme poverty the most in all of Latin America. Since 2009, 4.4 million people have overcome poverty. The middle class has exceeded the lower class in Colombia. We have created more than 4 million jobs, which is the highest in the region. The hydrocarbons industry’s support has largely made these achievements possible.

How can an improved security environment encourage greater investment?
Colombia needs a strong and competitive framework for peace. The hydrocarbons industry has suffered the most from the armed conflict. Terrorism against oil operations affects the country’s finances, industries and natural resources. Peace will not only allow operators to work in tranquility, but will also allow exploration in areas that were previously excluded for security reasons. Between August 2015 and December 2015, there has only been one attack by the National Liberation Army on pipelines and energy towers. Without incidents such as this, Colombia’s hydrocarbons industry can attract even more investment. In fact, many investors do not enter the country because we still have an armed conflict. With peace, our economy will grow 1-1.5% more each year, which will undoubtedly favour the oil and gas industry.

How will the National Development Plan 2014-2018 impact the oil and gas industry?
We have included a series of tools in the National Development Plan that will positively impact the industry. The plan outlines the direction of the country until 2018. Issues such as production, promotion and the strategy of crucial national interest projects were included in the plan, which has now become law. We also included an article about economic conditions that will allow companies in the industry to increase cashflow, guaranteeing current exploration for future production.