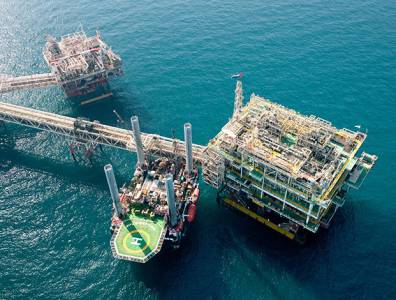 ABU DHABI, April 22, 2015 – Abu Dhabi has pegged more than $25 billion in spending to raise oil production offshore over the next five years. The emirate’s plans align with the UAE’s intent to boost national output capacity to 3.5 million barrels of oil per day (bopd) by 2017-18, from around 3 million bopd now.

Production from the Abu Dhabi National Oil Company’s two largest offshore units, the Abu Dhabi Marine Operating Company and the Zakum Development Company, is set to expand by around 33 percent 1.6 million bopd, according to Qasem Al Kayoumi, manager of the national oil company’s offshore division in its exploration and production directorate.

“We want to build capacity from production and from number of wells and infrastructure,” Al Kayoumi said at the Middle East Petroleum and Gas conference in Abu Dhabi, adding that the number of rigs offshore would have to be built up considerably to achieve the 3.5 million bopd target, potentially by more than 50 percent.

Click here for more news and features from Abu Dhabi