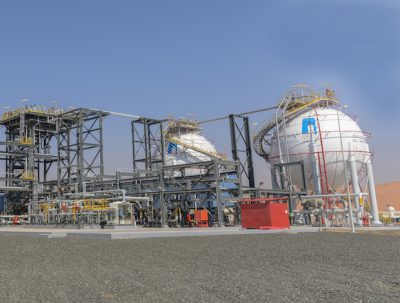 ABU DHABI, February 14, 2017 – Speaking at a conference in Abu Dhabi last week, ADNOC’s gas management director, Omar Al Suwaidi, said that the Al Hosn Gas project has outperformed expectations. The group expects production to nearly double over the next decade from the 6 million tpy of sulphur currently being produced by the project.

The Al Hosn Gas facility recovers sulphur during the treatment of sour gas from the Shah gasfield and is held in partnership between ADNOC with 60% and Occidental Petroleum (Oxy) with 40%.

ADNOC is hoping to put this sulphur to use both in Abu Dhabi and abroad. The company will both expand exports, planning to enter into partnerships in import markets to manufacture fertilisers, and support the development of a local sulphur products industry.

ADNOC believes sulphur production offers the company the opportunity to add value to its resources, improve its margins and diversify the nation’s economy.

Oxy’s CEO announced last week that production at the Al Hosn facility had been increased to 110% of rated capacity and the partners have announced a planned increase of the Shah gasfield’s production by 50%, without a timetable.

The increased productivity of the Al Hosn project is expected to hike Oxy’s cashflow by USD 400 million compared with 2016 figures.