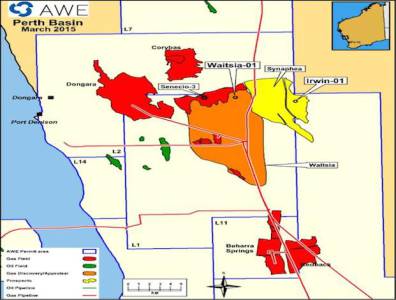 SYDNEY, April 2, 2015 – On Wednesday, Australian oil and gas exploration and production company AWE said they had drilled to a depth of 1,079 metres at the Irwin 1 exploration well.

The Irwin 1 well, which is located in the onshore Perth Basin in Western Australia and situated between the EP320 and L1 boundary, was spudded on March 25, 2015.

The well will be drilled vertically to a depth of 14,064 metres and is expected to take seven weeks until drilling is completed.

The programme is targeting the Dongara and Wagina tight sandstone formations, the Irwin River Coal and Carynginia Shale Measures and deeper targets such as the Kingia and High Cliff sandstones. The aim of the programme is to test the gas potential to the east of the Senecio and Waitsia gasfields.

AWE is the operator of L1, holding a 50 percent interest, while local company Origin Energy holds the other 50 percent. AWE is also a 33-percent shareholder in EP320, with Origin Energy acting as operator and holding the remaining 67 percent of shares.

China’s petrol demand may peak sooner than expected
Next