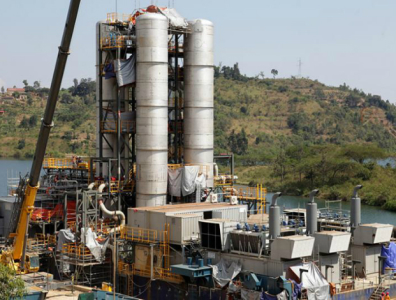 BRAZZAVILLE, June 11, 2014 – The Democratic Republic of Congo has called for bids for the extraction of methane gas extraction from bottom of Lake Kivu, one of Africa’s largest lakes. Announced over social media, no details surrounding the tender or the project’s specifications have been released.

ContourGlobal, a private power plant operator from the US, has engineered and implemented a solution using methane to provide neighbouring Rwanda with extracted gas from the lake for a nearby power plant. The private company raised more than $90 million to build the facility, which is currently operating under its first phase, supplying the 26-MW power plant onshore. It is to be expanded to reach a capacity of 100 MW.

Gases from nearby active volcanoes are responsible for the gas leaks into the bottom of the lake’s cold waters. Carbon dioxide and methane concentrations at the bottom of Lake Kivu are estimated at 250 bcm-300 bcm (8.8 tcf-10.6 tcf) and 55 bcm-60 bcm (1.8 bcf-2.1 bcf), respectively.

The KRG takes control of the Kirkuk oilfield