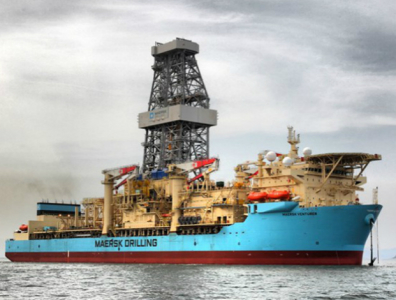 MONTEVIDEO, March 31, 2016 – Maersk Drilling, on behalf of a Total-led consortium, has spudded an exploration well in the deepwater block 14 offshore Uruguay, the country’s Ministry of Industry, Energy and Mining announced on Wednesday.

Using the Maersk Venturer drilling ship on a USD 44-million contract, the well is being drilled in a record 3,411 m of water and is expected to take between 111 and 120 days to complete.

Uruguay’s state-owned Administración Nacional de Combustibles, Alcohol y Portland, shortened to Ancap, awarded Total the block in 2012 on a 50% operating stake. The past five months have seen ExxonMobil and Statoil farm in on 35% and 15% stakes, respectively.

Earlier in March, Total’s director for exploration, Christian Tichatschke, said, “there could be an elephant out there,” referring to the offshore Pelotas Basin.

Saudi Aramco to press on with projects
Next