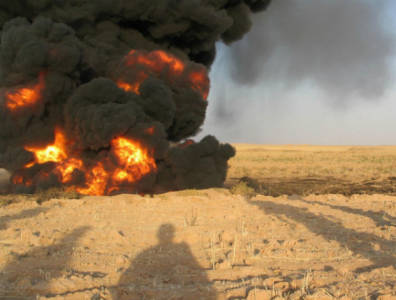 KIRKUK, May 13, 2016 – An official from Iraq’s North Oil Company (NOC) has estimated the damage of two burning oil wells in the Khabaz field to be in the range of some USD 180,000 per day. The fires, allegedly started by the Islamic State, are burning the equivalent of 4,000 bopd, Kurdish media quoted an NOC engineer as saying late on Thursday.

According to NOC engineering head Farhad Hamza, it may take until early June until the blaze, which started on May 4, is brought under control, pointing the presence of gas in the Khabaz field. “This [gas] has made the fire more intense and prevented it from being controlled easily,” he told Rudaw.

The police report stated that the suspects used explosives to blow up oil wells 18 and 33. An investigation in the aftermath of the blasts also uncovered a bomb at well number 40. A device detonated at well 39 failed to set it alight. The Khabaz field, managed by the federal government, has a total of 41 oil wells, the first of which was drilled in 1971. According to the NOC, there have been five attempts at sabotage this year alone.

Indonesia power programme in doubt
Next