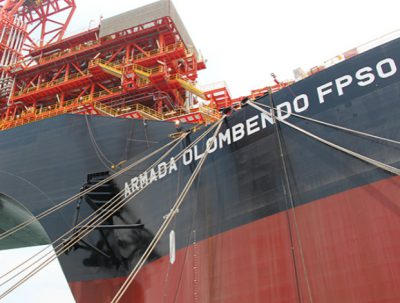 MILAN, February 8, 2017 – On Wednesday, Eni announced output was underway through the Armada Olombendo FPSO, marking the start of production from the East Hub project ahead of schedule.

Moored in some 450 metres of water, the FPSO is producing from nine wells in the Cabaca South East field through four manifolds. It is set to raise the output of Block 15/06 to 150,000 bopd by the end of 2017.

“Thanks to strong field development and project management, we are beginning production of the East Hub with a time-to-market of only three years, and five months ahead of schedule. Cabaça South East brings our number of fields in production to five, with two more expected to start before the end of 2018,” Eni CEO Claudio Descalzi.

In December 2016, the 3.4-mcm (120-mcf) and 80,000-bopd FPSO, constructed by Bumi Armada, arrived in Angolan waters and was installed on the project. The vessel, recommissioned from the Armada Ali supertanker, has a storage capacity of 1.8 million barrels.

Eni has been active in Angola since 1980, mainly as a non-operating stakeholder. The company holds stakes in many Angolan offshore blocks, such as the Kizomba project in Block 15 and the Lianzi field development.