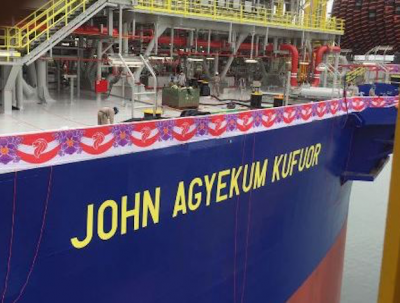 The vessel, with an oil-processing capacity of 58,000 barrels per day and a natural gas treatment capacity of 5.95 mcm (210 mcf) per day, is set to arrive at its destination in April, the company said in a statement.

“A total number of 18 subsea wells will be connected to the FPSO meanwhile a 63km pipeline to shore will provide domestic gas supply to Ghana’s thermal power plants for more than 15 years, a significant contribution for the country’s energy needs and economic development,” the press release added.

First oil is planned for this year, followed by first gas in 2018.