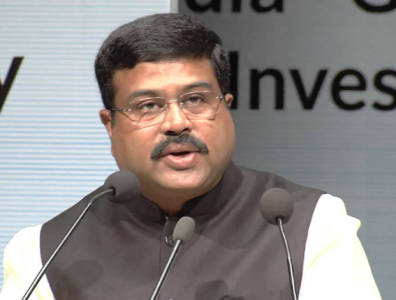 TEHERAN, April 11, 2016 – Indian Minister of State for Petroleum and Natural Gas Dharmendra Pradhan announced investments of up to USD 20 billion in Iranian petrochemical projects over the weekend. Pradhan’s two-day visit to Iran also resulted in both sides expressing the intention that an ONGC Videsh-led consortium would develop the offshore Farzad B block.

A document signed by Pradhan and his Iranian counterpart Bijan Zangeneh on Saturday noted that the two countries would work to conclude the deal within the next six months. “Both sides agreed to discuss the development plan, financial and commercial terms of Farzad B in a time-bound manner so as to conclude the discussions and consider awarding the development contract to an ONGC Videsh-led consortium by October 2016,” the text read. Discovered by ONGC Videsh in 2008, reserve estimates for Farzad B range from 363 bcm (12.8 tcf) to 615 bcm (21.7 tcf).

While touring the Chabahar Free Trade Zone and Port on Saturday, Pradhan also said India could work to establish petrochemicals and fertiliser plants, stressing the need for favourable gas pricing if Indian companies are to make the required investments. According to Indian media, plans for an LNG plant and gas cracker unit were also discussed. “Both sides agreed to continue examining various means of evacuation of gas, such as LNG, including through the proposed Iran-Pakistan-India pipeline,” the minister’s statement said.