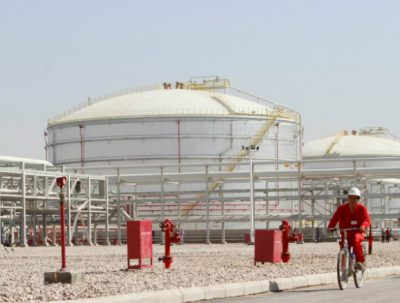 According to a Tuesday statement by Adnan Noshi, director general of the Iraqi Ministry of Oil’s Missan Oil Company, doubling output at the PetroChina-operated field would be feasible within the next two years with the launch of the third phase of development now officially approved.

In January, Missan Oil Company first proposed that PetroChina parent company China National Petroleum Corpration begin the third phase of the Halfaya oilfield development project. At the time it said the company would have to agree to deferred payments and accept to be reimbursed once the extra oil is produced.

In May, Missan Oil Company announced drilling operations on five new wells in the Halfaya field had been completed. Drilled by CNPC Bohai Drilling Engineering Company and Daqing Drilling Engineering Company, the five wells – HF13, HF23, HF57, HF61 and HF74 – bring the total number of holes in the field to 152. The additional wells should help raise production to the projected phase-three level.

PetroChina’s partners in the Halfaya development are Total and Petronas, which both hold 22.5% stakes in the endeavour. South Oil Company, re-branded Basra Oil Company earlier this year, represents the government and holds a 10% stake.