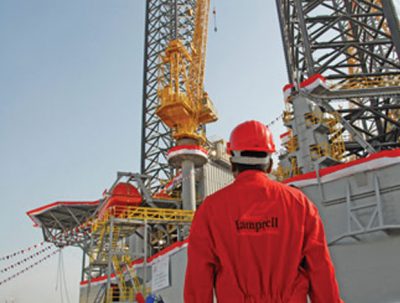 HAMRIYAH, ABU DHABI, March 6, 2015 – Lamprell announced completion of a jack-up rig for Greatship Global Energy Services to be used in the Indian offshore on Thursday.

The Greatdrill Chaaru is a LeTourneau Super 116E (Enhanced) Class rig. It is the second rig Lamprell has completed for Greatship, after the January 2013 delivery of the Greatdrill Chaaya, with both vessels contracted to work for India’s state-owned Oil and Natural Gas Corporation.

The rig was completed ahead of schedule, 18 months after steel cutting began. It will sail to India within a few days, the UAE company said.