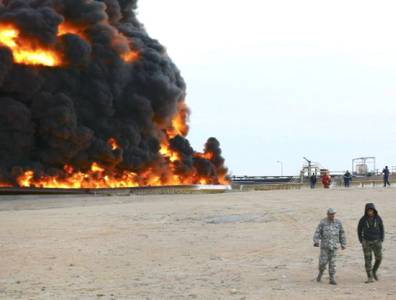 TRIPOLI, February 16, 2015 – Libya’s National Oil Corporation has made urgent calls for increased official protection for its installations, after an intense fire broke out at an oil pipeline between its El Sarir field and the Hariga port on Saturday. The blaze, which has since been extinguished, was attributed to sabotage, although no group has claimed responsibility.

The El Saris blast comes in the wake of Friday’s attacks on the nearby Makruk and Bahi oilfields. “The National Oil Corporation warns that the number of oil installation guards currently in the fields is not enough to protect them and to address such attacks,” Libya’s national oil company was reported as saying.

In an unconnected incident, gunmen stormed government buildings in the coastal city of Sirte. Officials were forced out of the complexes at gunpoint, as administrative offices and television and radio stations were taken over, according to the state news agency.