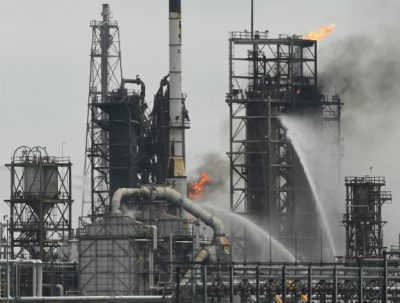 BATON ROUGE, August 17, 2016 – The record floods in the US state of Louisiana have necessitated the temporary shutting down of refinery units at ExxonMobil’s Baton Rouge refinery and chemical plant, situated along the Mississippi river.

According to local sources on Wednesday, the plant’s offsite LPG storage facility was at risk of flooding. Torrential rains have have forced around 20,000 out of their homes so far.

Motiva Enterprises, a joint venture between Saudi Aramco subsidiary Saudi Refinery and Shell, on Tuesday said the Convent refinery would be run by mission-essential personnel only on Wednesday.

In March, Saudi Aramco and Shell signed a non-binding letter of intent to distribute the assets of their 50-50 joint venture between them. It was decided that the 230,000-bpd Convent refinery would fall under Shell operatorship.

A fire at the plant last week caused damaged to the facility’s 45,000-bpd heavy oil hydrocracker, and measure were subsequently taken to keep hydrocarbons from leaking into the storm water system.