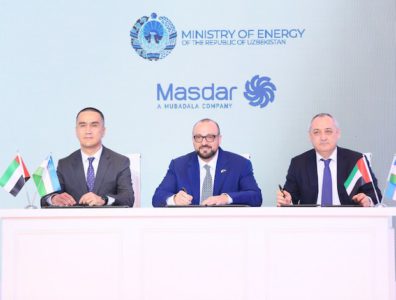 TASHKENT, April 2, 2021 – Abu Dhabi renewable energy giant Masdar has won approval from the government of Uzbekistan to build a 1.5-GW wind farm that will be Central Asia’s largest wind installation.

Located in the Zarafshan district of Uzbekistan’s Navoi region, the project will see an investment of USD 600 million.

An initial 500-MW project is scheduled to begin operations by the end of 2024, powering 500,000 homes and displacing 1.1 million tonnes of carbon dioxide per year. A power purchase agreement and investment agreement were signed between Masdar and the Uzbekistan government last June.

“For the UAE, it is important that our actions on climate can help amplify the efforts of others around the world,” UAE Special Envoy for Climate Change Dr. Sultan Ahmed Al Jaber said. “This partnership is a clear example of how we are putting that tenet into practice.”

Dr. Al Jaber also serves as ADNOC Group CEO and minister of industry and advanced technology. Read our latest interview with him here.

Uzbekistan targets a 25% share for renewables in its energy mix by 2030, including 3 GW of wind energy.