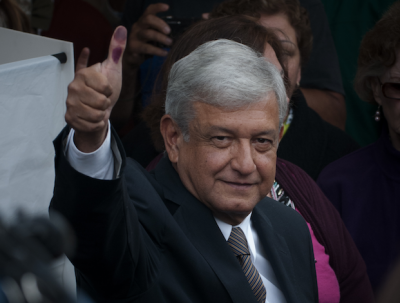 AMLO met with members of the Mexican Association of Hydrocarbons Companies, known as Amexhi, to discuss the oil producers’ concerns, and said E&P contracts in compliance with existing terms would not be expropriated.

“The president-elect told us several times that [the government] will respect the contracts, obviously to the extent that we are fulfilling the commitments of those contracts,” said Alberto de la Fuente, Amexhi president and Shell Mexico president and general director. “We are leaving [the meeting] with the peace of mind that our contracts will be honored.”

Speaking to reporters, AMLO’s pick for energy secretary, Rocío Nahle, confirmed the incoming administration’s stance, saying, “We are going to respect the rule of law, the agreements that the previous government has made.”

AMLO, who will take office on December 1, has repeatedly expressed sceptism about the benefits of the energy reform passed in 2014, which allowed private investment in Mexico’s oil and gas industry. Since being elected, he has walked back criticisms of the industry’s operation and has made commitments to work within the the new framework of the reform.