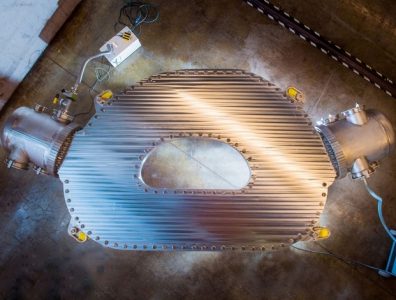 BOSTON, September 9, 2021 – Commonwealth Fusion Systems (CFS) has successfully tested the most powerful magnet of its type in its initiative to develop fusion technology, the Massachusetts Institute of Technology (MIT) spinoff reported on Tuesday.

The company used a high-temperature superconductor to construct a 3-metre-tall magnet that stably operates at a 20-Kelvin magnetic field strength. Typical conductors need to be around 5 Kelvin.

To get the magnet to these levels involved high-temperature superconductor coils made of rare-earth barium copper oxide and a two-week cooling of the structure involved.

The magnets are to be used to form a swirling plasma of superheated hydrogen isotopes deuterium and tritium that causes a fusion reaction.

The process differs from nuclear fission by combining atoms rather than splitting them.

“Performance of this magnet is similar to a non-superconducting one that was used in an MIT experiment that concluded its experiments five years ago. The difference in terms of energy consumption is rather stunning,” said Dennis Whyte, director of Plasma Science and Fusion Center at MIT.

CFS plans to have a reactor that will break even in terms of how much energy is released to create a commercially viable and modular fusion plant by 2025. The plant would be viable in the early 2030s and is meant to operate in conjunction with other renewable sources such as wind and solar energy.