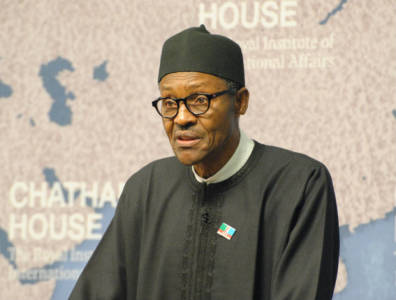 ABUJA, February 17, 2016 – Nigeria is disorganised due to its reliance on the price of crude, President Muhammadu Buhari said while addressing members of the British parliament in Abuja yesterday.

Since the government issued a warrant on January 14 for the arrest of Government Ekpemupolo, a commander of the Movement for the Emancipation of the Niger Delta, sabotage and kidnappings for ransom in the coastal region have risen dramatically.

The militant had previously been granted amnesty by the former president Umaru Musa Yar’Adua on June 27, 2009 under the stipulation that the group protect the installations they once sabotaged. The current government charges Ekpemupolo with money laundering and illegal diversion of funds connected to the previous government regime.

In mid-January, facilities in Kaduna and Warri operated by state-owned Nigerian National Petroleum Corporation were shut down due to bombing attacks. On January 30, explosions hit the Agip pipeline in the state of Bayelesa causing Italian producer Eni to lose up to 16,000 bopd in the aftermath.

Due to these security breaches, Buhari has recently ordered the deployment of military troops to protect essential facilities. The move has analysts worried that it may light the match for further conflict in the region and destabilise the already aching regional oil and gas industry.

Nigerian officials believe that 250,000 bopd are being stolen in Nigeria, and attacks are costing the country USD 2.4 million per day.

For more features and news on the oil and gas industry in Nigeria, click here.

Sinopec to close taps on four fields
Next

KRG to hand over oil output to Baghdad