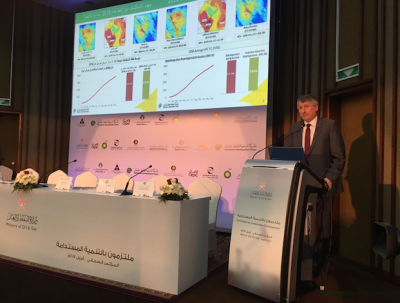 MUSCAT, April 3, 2017 – Oman will cap its output at 970,000 bopd instead of 1 million as previously planned if producers extend the oil production cut deal set to expire in July, a top energy official said on Monday.

“We support any initiative that will lift oil prices. If that means extending the current agreement beyond the first six months, we will not block it,” Salim Bin Nasser Al Aufi, Undersecretary at the Ministry of Oil and Gas, said at a media briefing attended by TOGY.

“However, we need to know the details – how long it is going to continue,” he added.

The comments came amid a heated debate over the future of the production cut deal reached late last year, days after OPEC and non-OPEC producers failed to agree on language urging its extension at a meeting in Kuwait.

“I am pleased to announce that in another year dominated by the low global oil price, PDO exceeded performance expectations, delivering a significant improvement across a broad range of functional and asset targets,” Petroleum Development Oman’s Managing Director Raoul Restucci said, commenting on the state oil company’s 2016 performance.

The company’s crude output last year averaged about 600,000 bopd, briefly hitting the 650,000-bopd mark, a target it had originally expected to accomplish by 2019, he added. At the same time, cost cuts and optimisations had resulted in some USD 1.5 billion of planned capex savings in 2017.

Oman LNG said it had upped its output by about 8% last year, producing 8.5 million tonnes of LNG and utilising some 73.5% of its installed capacity.

BP Oman also said it was ahead of previous estimates with the Khazzan project, and that it expected to start pumping some 14.2 mcm (500 mcf) per day of gas after the summer. A second train is to come on stream in 2018, bringing output to 28.3 mcm (1 bcf) per day.