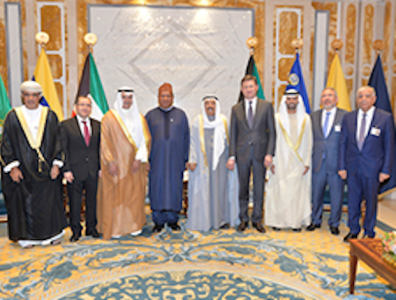 KUWAIT CITY, March 27, 2017 – Oil fell on Monday after OPEC and non-OPEC ministers omitted from their final statement on Sunday a recommendation to extend the production cut deal reached last November by a further six months.

Though that recommendation was part of an earlier draft, the final version of the statement by the OPEC/non-OPEC monitoring committee gathered in Kuwait City simply requested that a technical committee and the OPEC Secretariat “review the oil market conditions and revert … in April 2017.”

On Monday, Brent futures for May delivery were down about 1% to USD 50.38 per barrel at 2:07 p.m. London time even as several participants, including Qatar, Venezuela, Iraq, Oman and Kuwait, said they supported the extension. Thirteen analysts surveyed by Bloomberg said rising inventories and declining prices would likely force producers to continue with the cuts.

“Against a backdrop of rising U.S. crude output and underwhelming OPEC-led efforts to normalise bulging global oil inventories, positives are in short supply.”

Russia remained a prominent holdout, with its energy minister Alexander Novak saying on Sunday that his country couldn’t make any pledges until April.

While compliance with the 1.8-million-bopd cuts that went into effect in January has remained high, total production went up by some 2.3 million bopd in Q4 of 2016 while demand increased only by 200,000 bopd, OPEC’s Secretary General Mohammad Sanusi Barkindo said in his opening remarks at the Kuwait meeting.

“This supply growth is now working its way through the system,” he added. “It will take time for the market to fully absorb.”

Barkindo nevertheless said that the production-cut deal was having its desired effect.

“We still believe that the full and timely implementation of the decisions taken last year will see destocking accelerate by the end of the first half of 2017 with positive upshots and anticipated balanced market towards the end of the year,” he added.