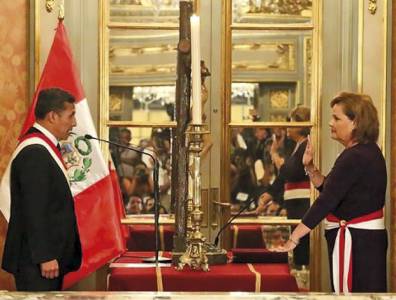 LIMA, February 19, 2015 – Ollanta Humala, Peru’s president, inaugurated four new members of his cabinet on Tuesday, on the back of strong calls from opposition parties amid general discontent.
Accordingly, José Luis Pérez Guadalupe will head the Ministry of the Interior, with Marcela Huaita selected to lead the Ministry of Women and Vulnerable Populations, Daniel Maurate for the Ministry of Labour and Rosa María Ortiz for the Ministry of Energy and Mines.
The latter minister replaces Eleodoro Mavorga, having since December 2013 acted as the highest authority for the National Service of Environmental Certification for Sustainable Investment.
Rios has also formerly performed as president of state concessionaire Perupetro, where she served for four months until December 2012. In her tenure there, bids for several oil blocks were suspended, leading industry sources to signal that her appointment to head the Ministry of Energy and Mines would not be welcomed by the country’s oilmen.