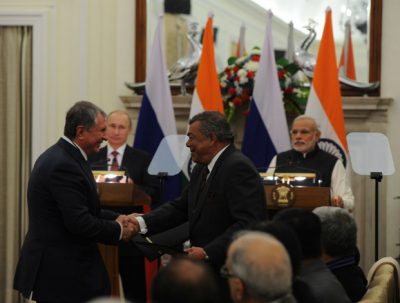 Rosneft and partners to wrap up Essar deal

MOSCOW , February 20, 2017 – The purchase of 98% of Essar Oil by a Rosneft-led consortium is projected to be completed next month, reports suggested on Monday.

In a deal struck last October, Rosneft is to acquire a 49% of the Indian company, while its partners Trafigura and United Capital Partners will buy another 49%.

The purchase is set to be completed on March 15, Reuters reported.

Among other assets, the consortium will acquire a refinery with the capacity of 20-million-tpy in Gujarat, as well as E&P assets located in Indonesia, Vietnam, India, Nigeria and Madagascar. Rosneft’s reserves will expand by 2,109 million boe.