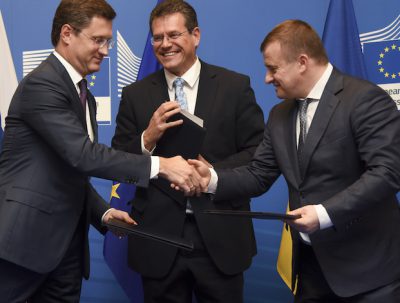 Russia and Ukraine reach supply accord

BRUSSELS, September 29, 2015 – Russia and the Ukraine have reached a supply agreement to bring gas to the EU.

The “winter agreement” is for about 2 bcm (70.6 tcf) of natural gas from Russian state-owned Gazprom for $500 million, or $227 per thousand cubic metres. The deal will be valid from the beginning of October through the end of March.

“The Russian government commits to lowering the contractual price of natural gas to Ukraine in the fourth quarter of 2015, and in the first quarter of 2016, to a competitive level that is comparable with the prices offered to the neighbouring EU countries,” EU energy commissioner Maros Sefcovic said at a Friday press conference. The agreed-upon price is lower than the average price of $258 per thousand cubic metres published by Dutch gas trader Title Transfer Facility.

The deal is seen to have eased relations between the two countries, which were complicated by the annexation of the Crimea, and a pro-Russia armed insurgency in eastern Ukraine. The conflict so far has claimed nearly 8,000 lives.

“What strikes me these days is the much softer tone of the Russian side when it comes to pricing,” Georgi Slavov, Marex Spectron head of research Giorgi Slavov told Bloomburg. “The discount granted by Russia means that they either see weak overall demand for their gas going forward or there is a political motive behind this decision.”