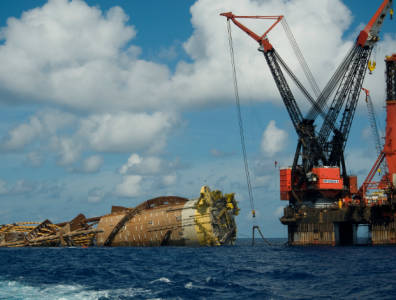 ANCHORAGE, July 23, 2015 – Shell is poised to begin its Arctic drilling programme, following the receipt of key permits from the US’ Obama administration. A Shell spokesman said the company plans to target the Burger J prospect. However, the Anglo-Dutch super-major is restricted to top hole drilling until emergency prevention equipment arrives on site.

On Wednesday, the Bureau of Safety and Environmental Enforcement, an agency under the Department of the Interior, granted Shell conditional approval of two permits allowing the company to drill up to two exploratory wells in the Chukchi Sea offshore Alaska. It marks the finalisation of the general approval Shell received in May.

The permits restrict Shell from drilling to the depth necessary to reach hydrocarbons until a capping stack is on site and deployable within 24 hours. The piece of equipment, which can weigh up to 100 tonnes, is used to plug a blown-out well.

The arrival of Shell’s capping stack has been delayed after the contracted multi-service vessel carrying it, the icebreaker Fenica, reported a breach to its hull and was forced to dock in Oregon for repairs.

A second major restriction forbids Shell from drilling two wells at the same time. Despite the short drilling season in the Arctic, which lasts from mid-July until September, Shell is confident it can execute its drilling programme on schedule.

The area offshore Alaska is estimated to contain up to 24 billion barrels of oil, according to the US Geological Survey.

ConocoPhillips retreats from China shale
Next