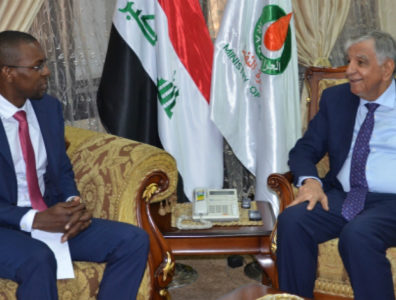 Sonangol called back to Iraq

BAGHDAD, January 11, 2017 – The Iraqi Ministry of Oil requested Sonangol to resume work at the Qaiyarah and Najmah fields on Tuesday. According to the ministry, all but nine of the wells set on fire in the area by the Islamic State had been brought under control.

On Wednesday, the ministry officially declared Qaiyarah well 66 to be extinguished.

Oil Minister Jabbar Al Luaibi said he had given the executive director of Sonangol a deadline of “no later than the end of February” to resume work. The NOC has not yet announced a decision publicly.

Sonangol had pulled out of the country in February 2014 because of the sustained security threats faced by the company and its inability to carry out work on the two giant fields. The government had already said it would not hold the Angolan NOC to the previously decided schedule, which included project completion in 2017.

Although largely focused on domestic hydrocarbons assets, the Luanda-headquartered group has overseas offices in Brazzaville, Hong Kong, Houston, London and Singapore. It had entered the Iraqi market in 2009.

That year, during Iraq’s second licensing round, Sonangol was the only company to bid for the Qaiyarah oilfield. When Sonangol left, it not only pulled out of Qaiyarah but also out of its other investment in the country, the Najmah oilfield. It held 75% stakes in both, with North Oil Company holding the remaining 25% shares.

In Qaiyarah, 40 wells were scheduled to be drilled, with a forecast 2017 production capacity of 110,000 bopd. Like Qaiyarah, Najmah was to be completed by 2017 as well. Sonangol holds a 20-year contract for the rights to development should it wish to return to Iraq. Unlike the USD 2-billion Qaiyarah investment, the project value of Najmah has not been disclosed.

Image courtesy of the Ministry of Oil