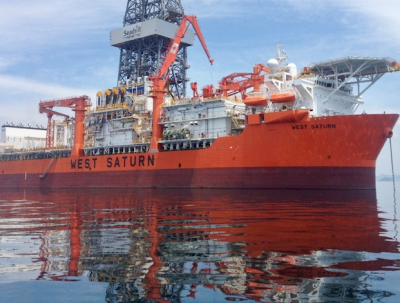 OSLO, July 13, 2017 – Statoil said on Thursday that it had contracted a Seadrill drillship to explore Brazil’s BM-S-8 licence, of which it agreed to acquire an additional 10% a day earlier.

The value of the Seadrill deal was not disclosed but the scope of the fixed contract covers an exploration well and a drill stem test, with options for seven additional exploration wells. The contracts will start between December 1, 2017, and March 1, 2018.

The company intends to use the West Saturn to drill in the Guanxuma subsalt prospect and to test the Carcará discovery, part of which is located in the same licence.

“In addition, Statoil is evaluating its options for the Northern open area licensing round, expected in October 2017. We believe Statoil is well-positioned for future operatorship of a unitised Carcará field.”

On Wednesday, Statoil signed a deal with Queiroz Galvão Exploração e Produção to acquire the latter’s 10% stake in the licence for USD 379 million, increasing its own interest to 76%. Statoil is the operator of BM-S-8, which it estimates to hold between 700 million and 1,300 million boe.