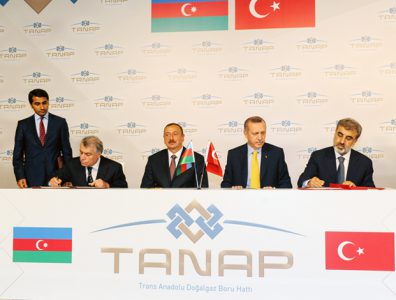 TANAP is natural gas pipeline originating in Azerbaijan and connects to Europe by going through Georgia and Turkey. The pipeline will also link the Trans Adriatic Pipeline, connecting the Shah Deniz field to markets in Europe. The Stage Two development of the Shah Deniz field aims for 16 bcm (565 bcf) of gas annually and will be transported through Georgia, Turkey, Bulgaria and Italy.

During the UK Energy Minister Charles Hendry’s speech, he addressed the necessity for low carbon, affordability and supply in order to solve Europe’s energy dilemma. Hendy also stated that he sees the potential of Azerbaijan’s resources to Europe’s long-term energy security. He added, “And for me there was no doubt that the fundamental building block for that was security because if you don’t have energy security you will not be going low-carbon and you certainly won’t be affordable.”

The Caspian Oil and Gas Conference follows a European Parliament Committee decision last month to vote in favour of a European Energy Security Strategy draft report that highlights the use and supply of energy.

For more news and information on Azerbaijan, click here.

Petrofac awarded $45 million ONE contract
Next