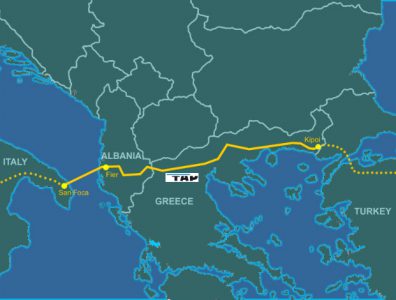 PARIS, July 21, 2015 – French-listed Technip has won a project management consultancy services contract for the Trans Adriatic Pipeline (TAP) project. Technip’s contract applies only to the onshore portions of the pipeline. Services will include overall project and site management, procurement and subcontracting for all engineering, procurement and construction packages, as well as warranty management and the project closeout.

Technip will execute the contract mainly from its office in Rome and TAP’s headquarters in Baar, Switzerland. Onsite project centres will also be opened in Greece, Albania and Italy.

The 870-kilometre TAP will tie-in with the Trans-Anatolian Natural Gas Pipeline at the Greece-Turkey border, and then proceed through Greece and Albania, cross the Adriatic Sea and end in Puglia, Italy. The project is scheduled for completion in the second quarter of 2020.

TAP is being supported by the European Commission as part of the Southern Gas Corridor initiative to diversify Europe’s gas supply and open a new route to gas produced in the Middle East and Caspian region. The pipeline is designed with an initial throughput capacity of 10 bcm (353 bcf) per year, with an upgrade potential to 20 bcm (706 bcf) per year.