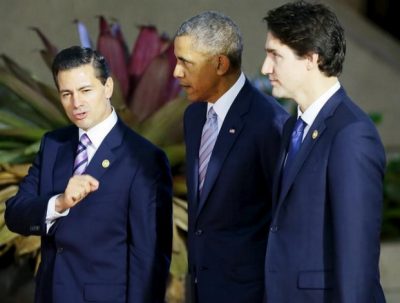 Three amigos to crack down on methane

OTTOWA, June 30, 2016 – Mexico has pledged to join an initiative backed by the US and Canada to reduce oil and gas industry-related methane emissions, a joint statement released on Wednesday read. The three countries aim to cut methane emissions by as much as 45%, as well as achieve 50% clean power generation within the next decade.

“North America has the capacity, resources and the moral imperative to show strong leadership building on the Paris Agreement and promoting its early entry into force,” the countries’ joint statement read. The initiative to bring down methane emissions from oil and gas operations was first initiated by US President Barack Obama and Canadian Prime Minister Justin Trudeau in March.

While the pledge made on Wednesday at the so-called Three Amigos meeting in Ottawa, where Mexican President Enrique Peña Nieto met with Obama and Trudeau for talks on the North America Free Trade Agreement, is mostly symbolic in nature, Canada aims to unveil regulation to cut methane emissions by early 2017.