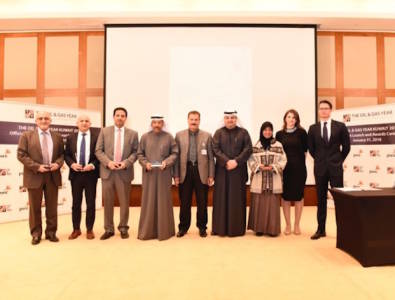 KUWAIT CITY , February 2, 2016 – On January 31, 2016, The Oil & Gas Year Kuwait 2016 was launched at the Jumeirah Hotel in Kuwait City. At the ceremony, National Petroleum Company CEO Mohammad Ghazi Al Mutairi accepted the The Oil & Gas Year’s Man of the Year award for his involvement with Kuwait’s refining revolution, which includes the Clean Fuels Project.

The fourth annual investment report for the Kuwait hydrocarbons industry provides an in-depth guide to the Gulf nation’s energy industry. The study was conducted in partnership with both the Kuwait Direct Investment Promotion Authority and Burgan Bank. The information presented in the book was collected over a six-month period by a team of experienced journalists who met with key officials along the entirety of the hydrocarbons value chain, such as Kuwait Oil Company deputy CEO of exploration and gas Menahi Al Enezi.

One of the key challenges addressed in The Oil & Gas Year Kuwait 2016 is today’s low oil prices and the resounding effect that this single variable has had in Kuwait, juxtaposed with the extensive mega-projects that the nation has undertaken.